Review: “Buffy The Vampire Slayer: A Stake To The Heart” by Fabian Nicieza & Cliff Richards 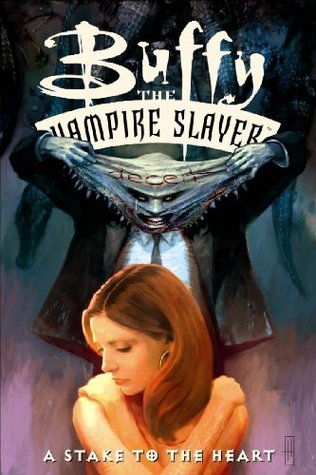 The Buffy binge continues! Today I bring you A Stake To The Heart, the final arc of the 1998 Dark Horse ongoing series.*

Buffy is out of the institution and back home, but her parents’ failing marriage has finally imploded for good. Watching from afar, Angel devises a plan to try and alleviate the emotional pain gripping Buffy and her family. Not too surprisingly, it backfires and a series of “malignancy demons” are released. Buffy is then forced to battle physical manifestations of the negative emotions she and her family are dealing with.

Plot-wise, this isn’t the most complex of tales. It is, however, very much like the show in that it uses Buffy’s Slayer status to deal with non-tangible issues metaphorically through slaying. It was well-written, with all of the characters ringing true, and pulled the audience full-circle back to where the show started. The art was also great, and whatever problems Richards had with the first “Year One” issues are long gone by this point. Everyone looks like themselves, with the occasional exception of Buffy’s mom. For some reason he has trouble with her…

As with earlier books, this arc can be found in it’s own dedicated TPB or it is included in Dark Horse’s Buffy omnibus series in Volume II.

CONTENT: No profanity to speak of. Vampire violence and slaying, as per the usual for Buffy. No explicit sexual content, but during one of the demons’ attacks we see a female junkie sitting in the bathtub. Nothing is explicitly seen, but she’s definitely naked. There’s also a sequence where Angel is naked as a requirement for a spell he’s working. Again, nothing is seen thanks to camera angle and conveniently-falling shadows, but Whistler makes a comment about him appearing “excitable” that I didn’t need. As mentioned before, Buffyverse vampires are demonic, and to boot this particular arc features both actual demons and magic being worked.

*Yes, the final arc. They went back and did a “Year One” thing after the show was cancelled, to buy time to figure out how to move forward. I decided to read the books in chronological order based on the events depicted as opposed to publishing order, which has a few weird effects but mostly I’m happy with.