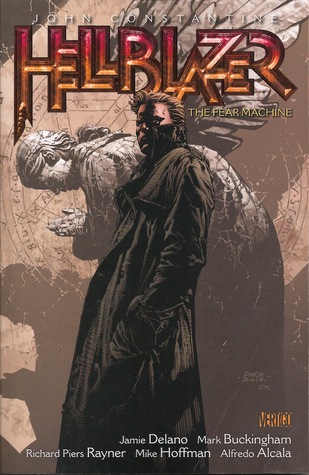 John Constantine is at it again. You may remember I reviewed the first two volumes of the series not too awfully long ago, and wasn’t too impressed. I really like the character, but the first couple volumes left me underwhelmed. With Original Sins, this had a lot to do with being dropped into the middle of events already moving (from the Swamp Thing book, of which this was a spin-off) and the lack of resolution (rectified in the second volume.) My issues with The Devil You Know mostly stemmed from my general dislike of stories that unfold in nightmares, astral journeys and/or acid trips (yet I think Neil Gaiman’s Sandman is some of the best storytelling in the medium, so figure that out), which comprised most of the stories in that collection. I’m in the minority, I know–Jamie Delano’s entire run on this book apparently holds legendary status among the fans, but I’ve just not been amazed yet. That said, The Fear Machine was a definite step in the right direction.

In his attempt to draw Constantine out of hiding, Nergal massacred his housemates and left them for Constantine to find in his apartment. Nergal has been dealt with, but the mess he left behind is still causing problems–Constantine’s face is splashed all over the front pages as the number-one suspect in the brutal slayings. (Apparently, this came to a head after his side trip to track down The Horrorist last volume. I won’t complain, that story was good stuff.) Dodging the police, Constantine falls in with a group of nature-loving hippie Travelers and finds something that has been in short supply since Newcastle–a modicum of peace. In this collection of hippies and misfits, Constantine finds the closest thing to a family he’s had in a long time. He should have known it wouldn’t last. When a brutal raid by a faux-police force ends in the kidnapping of Mercury, the kooky girl with special powers that first pulled him into his strange new community, Constantine resolves to find her and make things right. Of course, this isn’t as simple as it should be. Constantine soon finds himself embroiled in a web of conspiracy and intrigue that involves a secret Masonic order in control of a powerful weapon, a disgraced cop, a Soviet spy, and an old lover he betrayed. The stakes are the future of the entire world, but this time Constantine may be in way over his head. This time he may not even be able to save himself, let alone his friends….

The fact that I actually liked the story presented here in The Fear Machine is a little bit baffling to me at first glance. There’s a heavy dose of hippie free-love the-Earth-is-our-mother ideology, an unhealthy amount of drugs, not to mention the New Age/Ne0-Paganism that underlays the entire story arc. None of these are things I’m a fan of, either in person or (generally, at least) in fiction.* The plot rambled all over the place and was fairly slow to get moving. On top of that, those nightmare/acid/astral sequences I was complaining about last time were still present, center-stage even. And yet, it worked. I liked a lot of the characters despite disagreeing with nearly everything they stood for. The plot rambled, but always with it’s end in sight. It started slow, but there was a sense of rest and restoration for Constantine that we the reader got to share. And yes, the nightmares/acid trips/astral journey sequences I so dislike were still heavily featured, but unlike last volume, this time there was a point to them. They may have even have subtly pulled in the Merlin/Kon-Sten-Tyn thing with the finale, I’m not sure. Plus, we got a nod to Neil Gaiman’s Sandman and Constantine’s appearance in the early issues of that book. The end result was a story that I actually felt justified the reputation this book holds, and I will most certainly keep reading this as my library gets in more volumes.

CONTENT: Profanity, everything shy of the dreaded “F-bomb,” and a lot of British profanity to boot. Strong, bloody violence, including occult ritual and nightmarish madness. Strong sexual content, including nudity–mostly of the featureless “Barbie-doll” variety, but still–homosexual content, and a discussion of rape.

*I don’t condemn the appearance of such themes in fiction, per se, and will take their presence over censorship any day, but I have zero interest in them. If you want to use them to good purpose in your story, fine. I can deal. Just don’t expect me to be thrilled at the prospect.