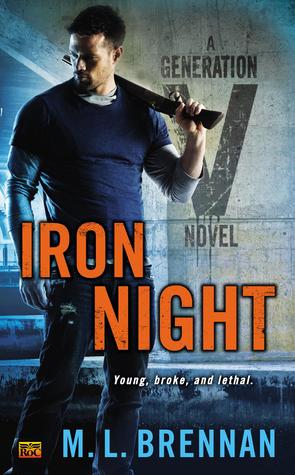 A few months ago I reviewed the first book in the new(ish) urban fantasy series Generation V. As you can probably surmise from the fact that I’m now reviewing the second entry (and have the third on preorder), I was a huge fan. And this second entry? It’s just as excellent as the first, if not more so.

Things are looking up for Fortitude Scott. He’s made an uneasy peace with his own budding vampirism as well as his family, and has even spent the summer training with his brother Chivalry every morning in between running “errands” for the family. And yes, that sounds suspiciously mafia-like for a reason. He’s traded his minimum wage job at the coffee shop for a slightly better paying (though no more pleasant) job as a waiter at an upscale restaurant, although the head chef loves nothing more than to force him to taste-test the newest meat-based menu items despite his professed vegetarianism. Suzume Hollis, his kitsune friend, is no less mischievous than before, but at least she hasn’t pulled anything too destructive lately. He’s even managed to find himself a decent roommate after a long stream of complete assholes. Unfortunately, this happy state of affairs cannot last, and one night Fort is yanked from a deep slumber by a noise just at the edge of consciousness. When he investigates, he discovers his roommate’s body, hands and genitalia missing and with suspiciously little blood present. For reasons that defy comprehension, someone has ritualistically tortured and killed him before dumping the body back in his own apartment. That someone is going to pay. Fort’s ensuing investigation takes him far deeper into the local otherworldly community than he’d ever hoped to go, from tangling with a skinwalker to learning the ins and outs of the elf community’s attempts to breed themselves back from extinction. These are dangerous forces he’s messing with, and it’s going to take everything he’s got to wrap this up without more friends dying along the way….

One of the things I appreciate about this series is the strides the author takes to distance herself from the conventions of what has become a popular but occasionally-derivative genre. She goes out of her way to showcase the more unusual members of the otherworldly community–the kitsune, for instance, which I’ve only ever heard of elsewhere in the midst of a deranged coworker’s attempt to get me hooked on one anime or another.* If she is going to use a more conventional creature, you’d better forget what you know. Vampires are generally monstrous, true, but most of the other stuff you know is wrong. Crucifixes are worthless. Garlic and sunlight are no issue when you’re young, but as you advance in age and you lose more and more of your humanity they can become deadly. Mirrors work just fine, and shapeshifting just simply isn’t in their repertoire. They’re not immortal, but they are incredibly long-lived, and sorry, but you can’t join them. They’re an entirely separate species, albeit one that looks very human. In fact, one of Fort’s granduncles sponsored the publication of Dracula in order to spread those false notions. The elves are far from the proud-but-good nature spirits that Tolkien wrote, instead being a ruthlessly violent race that nearly exterminated themselves before realizing their danger. Now there are only a handful of pure-blooded elves in the world, all male, along with a slew of half-breeds with more or less magical ability. Now, considering the depths of my disdain for Twilight and it’s changes to the vampire archetype, why do I approve of this? Quite simply, Ms. Brennan changes the details but remains true to the core of what vampires are–apex predators, monsters who (with rare exceptions) will kill you without batting an eyelash. Ms. Meyers just neutered them. There’s a difference. Fort gets more of a chance to shine this time, as he’s on his way to inheriting his full vampire abilities and is forced to rely less on Suzume to do the physical heavy lifting, but don’t worry, she’s still along for the ride in all of her scene-stealing glory. Bottom line: I really can’t wait for the next book to get here.

CONTENT: R-rated language, present but not gratuitous. Some fairly disturbing violence. Quite a bit of flirting and innuendo, along with some mildly-explicit sexual content. Some magic and ritual sacrifice, but it’s more rooted in the elves’ or kitsunes’ natural abilities than it is any occult connection.

*I have no problem with anime, per se, but I’ve yet to find one that catches my interest. And said coworker has forfeited all claims to good taste with some of the titles he’s described as “excellent.” Seriously, one of them was all about a father-son team who are cursed to become attractive coeds whenever something (I don’t remember what it was, I was too busy trying to decide whether to laugh or back away slowly) happens, which of course causes all sorts of comedic mix-ups and misunderstandings. Oh, those wacky Japanese animators…..