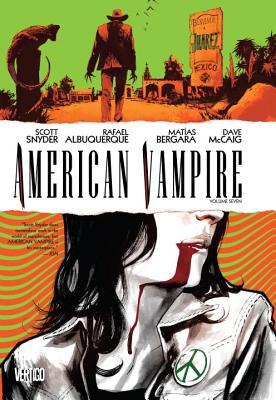 Finally! American Vampire is back from hiatus, and my library got it in! As always, this review might spoil previous collections, so you might want to start from the beginning…. (Volume I/Volume II/Volume III/Volume IV/Volume V/Volume VI) You’ve been warned!

It’s now 1965, and in the ten years since Pearl Jones and Skinner Sweet last saw each other everything has changed. America is a different place, from the space race to a war half a world away. Pearl has converted her family farm to a safe haven for young and innocent vampires on the run from the real monsters, while Skinner spends his time on the southern border robbing smugglers and drug lords. It’s peaceful, comparatively speaking. Of course, it can’t last….The Gray Trader, the original vampire, the first link in the evolutionary chain that ends with Skinner and Pearl, is coming. He’s powerful. He’s evil personified. He may just be the Devil incarnate. What does he want? God only knows, and unfortunately he’s not all that chatty with our protagonists….Rounding out the collection is a flashback story featuring Gene Bunting as he tracks the myth of the Gray Trader in 1947, following clues left in the journal of a doomed miner working a claim digging its way to Hell.

Gotta say, this was definitely worth the wait. Whereas the previous entries in the series have been stellar, they were admittedly lacking in a cohesive, ongoing narrative that tied the different stories together. Not that I didn’t enjoy reading about the various adventures of our protagonists, those were great stories! But now it looks like we’ve got an overarching story to tie everything together. What’s more, it’s looking to be a doozy! Rafael Albuquerque’s art is stellar as usual, with his trademark style that fits this book so well. Newcomer to the series Matias Bergara also hands in a great bit of work on the backup tale. I can’t wait to see what happens next….

CONTENT: This isn’t for the kiddies! It’s a Vertigo book, so you’ve been warned. R-rated language. Strong, gory violence, as you would expect from such monstrous creatures as appear here. Pearl and Skinner are on the side of the angels, but they’re monsters nevertheless. Their opponents? They’re worse. Mild sexual references, plus a couple creepy bits of nudity in the sketches from the journal. Not too explicit, but there nevertheless. No occultic content; these vampires are purely physical.