Review: “Bombs Away” by Harry Turtledove 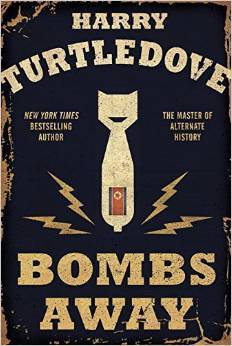 Believe it or not, this is actually the first ever Turtledove I’ve had the pleasure of reading. I’ve managed to build a small collection, grabbing assorted works at garage and library sales over the years, but they always seem to be the middle bits of series. Not this time! This time I’m in on the ground floor for his new series exploring what might have happened had the Cold War gone hot in the early days. In the later days, that’s no fun since it would mostly just result in the planet becoming a cinder….

At the height of the Korean War, with Red Chinese forces pouring over the border, the idea of using nuclear weapons to turn the tide was under serious consideration. In the world we inherited President Truman decided against unleashing that genie, but now Harry Turtledove turns his pen to exploring the potential consequences of such action. Come along for the ride in Bombs Away as Turtledove picks apart the threads of history and weaves them together once again in a different and altogether horrifying configuration….

There’s a reason Harry Turtledove is billed as “The Master of Alternate History.” Several reasons, in fact. The man seems to possess an unparalleled grasp of history, knowing instinctively just where to push in order to set events onto a new, believable course. Just as importantly, his characters all feel very real—figures both fictional and historical leap off the page and pull you into their world. While story thrives on conflict, Turtledove stands testament to the fact that you don’t necessarily need a villain, shying away from easy caricature in favor of focusing on ordinary men doing the best they can. From the White House to the trenches of Korea, from the cockpit of a B-29 bomber to the streets of divided Germany, Harry Turtledove gives a stellar introduction to a hellish world that could have been.

CONTENT: Harsh, R-rated language, widespread but not gratuitous. In a world sprouting mushroom clouds, profanity seems appropriate…. Strong violence, as you would expect from World War III. Occasional sexual content, semi-explicit. Some of the characters are racist, and the fallout of the Holocaust is dealt with to a degree.