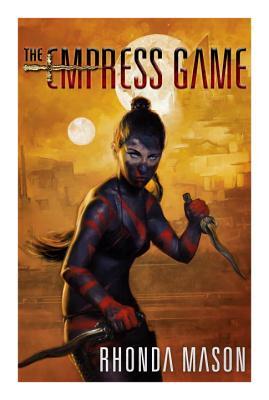 Always a pleasant surprise when a book exceeds your expectations. I feared this one would be a cheap Hunger Games knock-off, but that couldn’t have been farther from the truth. It’s way more interesting and the world is far more fleshed out than that comparison would imply….

Kayla Reunimon is not someone you want to mess with. Her family is dead, killed in a coup orchestrated by treacherous agents of the Sekian Empire in an attempt to bend the advanced technological expertise of the Wyrds to their own ends. Now exiled and presumed dead, Kayla is forced to fight for her life in the gladiatorial pits as the mysterious Shadow Panthe. It’s not much of a life, but it keeps Kayla and her little brother under the radar of the Imperial Diplomatic Corps…until a new Empress Game is called, summoning princesses from across the Empire to the capital to compete for the hand of the Emperor Apparent in brutal combat. Now Kayla finds herself recruited in a daring scheme to fix the games…and perhaps save her people in the process.

At first glance, the central premise of the book seems completely idiotic. A galactic empire that decides matters of succession via gladiatorial combat? Far-fetched is putting it kindly. Except that the author knows this is ridiculous, and so do her characters. Thus, the whole point of fixing the game to put the right person on the throne. There’s even a believable rationale for how that started, though it doesn’t do much to redeem the practice. I was a bit skeptical going into the book, but I have to say that the author won me over. I shall certainly be looking for the next book in the trilogy, especially since this one simply cannot stand on its own.

CONTENT: Minor profanity, along with some stronger fictional swearing. Occasional sexual innuendo, including a sex scene that is frank without being graphic. Strong violence.

This is a longer version of a review I wrote for the Manhattan Book Review.