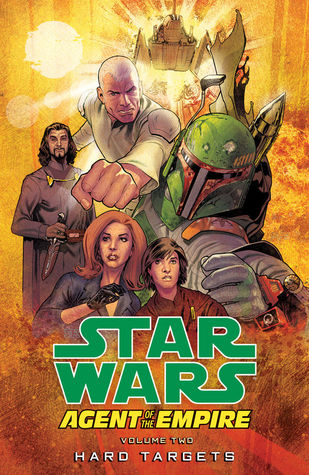 I’ve been going through my backlog of Star Wars comics, and I realized that I never got around to the second arc of John Ostrander’s stellar Agent Of The Empire series! Obviously, that had to be remedied. And so, here we are!

Jahan Cross is a very dangerous man, willing to do whatever he has to in order to make the galaxy a better place. Unfortunately, he believes wholeheartedly that the Empire is the only thing separating the galaxy from utter chaos and ruin. In the interests of the Empire, Cross will do anything that is asked of him. But when he discovers that his most recent kill was less about removing a threat to the Empire and more about lining the pockets of an Imperial official, Cross’s loyalties are placed to the ultimate test….

The good news? This second arc is every bit as good as the first, maybe better. The bad news? This is all there is. The series was canceled after this for some reason, probably related to the loss of licensing rights. Whereas the first arc dealt with Cross very much secure in his belief that he was working in the galaxy’s best interests (rightly, in that case), this time out we see a slightly different side of our shadowy hero. This time he knows for certain that his orders have nothing to do with improving the galaxy and everything to do with the personal ambitions of petty politicians. The question is, can Cross manage to make things right without breaking ranks? You’ll just have to wait and see!

As with the previous arc, this story stands pretty well even if you’re not a Star Wars buff. Obviously you’ll be better off if you read Agent Of The Empire: Iron Eclipse, but aside from that its pretty much new material. You get appearances by Armand & Ysanne Isard, but you learn everything you really need to know about them from context. Leia and Winter make a cameo, but again prior knowledge is far from essential. The barest familiarity with the Clone Wars gives you the identity of Count Dooku, whose family features heavily, but as he’s a movie character I think its safe to assume anyone interested knows who he is.

CONTENT: Mild to no profanity. Some violence, occasionally gruesome. Quite a bit of flirting, but no overt sexual content.