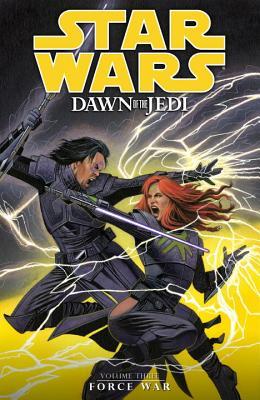 Here we go again, diving one last time into the ancient history of the Star Wars universe. Obviously, this will contain spoilers for the previous volumes of the series, Force Storm and Prisoner Of Bogan.

Jumping forward a year from where we left our heroes, we find the Tython system embroiled in  full-scale war. The Rakata have arrived in force, capturing several of the outlying planets before being turned back by the combined forces of the Je’daii and the other Tythans under the command of Daegan Lok. Wielding Forcesabers modeled on that carried by former Force Hound Xesh, the Je’daii walk a fine line in the Force, drawing increasingly on the Dark Side to power their weapons and carry them through battle unscathed. Despite the endless battles facing him and his friends, Xesh is finding himself increasingly in balance as he learns to touch the Light Side of the Force as well as the Dark, helped in no small measure by his growing relationship with Shae Koda. Fighting together the Tythans have managed to stymie the Rakatan advance, but at heavy cost. What they don’t know, however, is that the Rakata want far more than just Tython. They want the Infinity Gate buried beneath it, an ancient piece of tech that would unlock any and every world in the galaxy for conquest….

As with the previous entries, I absolutely loved this one. The one-year jump forward glossed over a number of events that I would have enjoyed getting to see, but given the timing of the license shifting to Marvel, I suspect that this was the only way to get to the conclusion Ostrander & Duursema envisioned before running out of time. I’d love to have a lot more of this series, obviously, but given that events didn’t allow that to happen, this was an incredible conclusion to the series. I would enjoy seeing how the Je’daii evolve into the order we see at the start of the Tales Of The Jedi comics, but that is naught but a pipe dream now that all the relevant media has been relegated to Legends status.