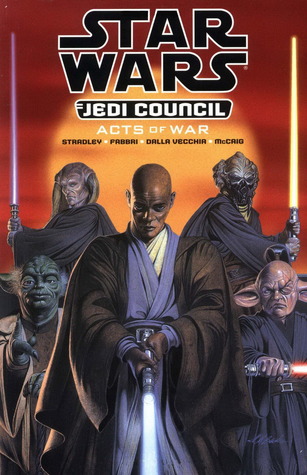 Shifting gears a bit, this time out we’re visiting a setting a little closer to the events of the films. The Dark Horse Comics miniseries Jedi Council: Acts Of War takes place only a year before the events of Star Wars–Episode I: The Phantom Menace (that’s 33 BBY, if you’re keeping track). This story was published as a standalone collection, and reprinted in Star Wars Omnibus: Rise Of The Sith.

Before the galaxy was engulfed in the Clone Wars, transforming the Jedi into generals, they served to keep peace across the galaxy-spanning Republic. One such threat comes in the form of the Yinchorri, a warlike species newly accepted into galactic society. When the Yinchorri begin trying to carve out a small empire for themselves among the stars, Jedi Master Mace Windu dispatched a pair of Jedi to manage the crisis. Their mutilated bodies were soon delivered to the office of Chancellor Valorum. Now the Council must mount a full-scale expedition to end this threat to peace in the galaxy, as well as seeking to uncover just who is pulling the strings of the Yinchorri….

This was a well-executed story. It can be somewhat difficult to keep an appropriate degree of tension in stories featuring characters you know will survive based on later appearances (Qui-Gon, Obi-Wan, Mace, Adi, etc.), but the large cast keeps this from being an issue. Each of the characters here is well developed, and some of the new characters introduced in this miniseries would go on to become fan favorites across the franchise. The art is also of high quality, serving the story well. Is the story essential? Not particularly. It’s the first appearance of K’kruhk, though, and Randy Stradley enjoys returning to the character of Micah Giett on occasion in the pages of Tales. Plus, it’s always fun watching Palpatine’s labyrinthine plots to pave the way for his eventual rise….