Okay, I’ll just say this up front and get it out of the way: you should totally be reading the real books, not these graphic adaptations. However, I’ve read the real thing, and so now have no compunctions about reading the graphic novel. To clarify, this is a graphic novel adaptation of the first novel in the series, published in two volumes and reviewed here as one unit.

When the Chicago PD have a case they don’t know how to explain, they give it to Karrin Murphy and the Special Investigations division. When Murphy thinks there may actually be something supernatural going on, she calls in the only practicing wizard in the Chicago phone book–Harry Dresden. This time, there’s a couple of corpses in a gore-splattered hotel room, their hearts exploded from their chests mid-climax. One is a high-class hooker, one of Madame Bianca’s girls. The other is the right-hand man of Chicago’s local mob boss. This was obviously the work of a powerful wizard–the problem is, Harry’s the only one around who fits the bill. Now Harry has the council watching his every move, and any attempt to recreate the spell used to kill the hitman and the hooker may be enough to seal his doom. On the other hand, if he can’t figure out what happened, the city will soon be gripped in a war between the mob and Madame Bianca’s vampires. In addition, he has another seemingly-unrelated case to distract him, and a beautiful tabloid journalist vying for his attentions. Can Harry unravel these tangled plot threads and figure out what’s going on? Go read the book and find out! 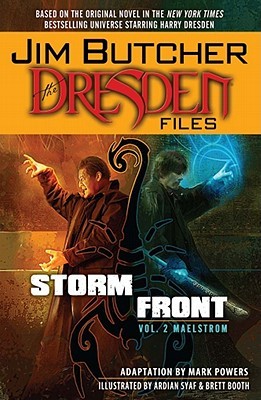 Granted, it’s been a while since I’ve read the original novel this is adapted from, but this seemed incredibly faithful. Jim Butcher seemed to think so in his introduction, anyway. The writing was good, which can partially be laid at the foot of adapter Mark Powers but I think belongs mostly to Jim Butcher’s original novel. The art, however, is the reason I picked this up in the first place–keep in mind, this is adapted from a book I’ve already read, so it wasn’t too high on my priority list. Ardian Syaf, the same artist from the prequel Welcome To The Jungle, continues his stellar work here. Characters I’ve been reading about for years jump off the page almost exactly how I imagined them, and I have to say it’s been a great experience. Where the first volume  falls short is in it’s bonus story in the back, an adaptation of the first ever Dresden short story Restoration Of Faith. It wasn’t a particularly strong story to begin with (by Butcher’s own admission), and the graphic treatment isn’t kind. It’s adapted by Grant Alter with art by Kevin Mellon, and it just doesn’t stack up. Important information is never given, a character just appears out of nowhere when it’s time for him to show up with no introduction, and the villain’s defeat is almost incoherent–if I hadn’t read the story before I would have no idea what happened in those two panels. The art isn’t particularly horrible, but it’s not good either. I would almost tell you not to bother with this so-called bonus story, and just find the original in Butcher’s Dresden anthology Side Jobs. Midway through producing the adaptation, it appears the original publisher (Dabel Brothers) either went out of business or sold the property to Dynamite. This obviously delayed some of the production, and artist Ardian Syaf got a better offer from DC. You know, one that actually involved working and getting paid instead of waiting for the paperwork to be settled. I don’t like that he left, but I can understand it. The powers that be replaced him with Brett Booth for the remainder of the second volume, and I suppose Booth did okay. Had he been on the book from the beginning, I would have been fine with it. As it stands, however, the switchover was jarring, unannounced, and a little disappointing. Will I keep reading these? Of course! It’s still Dresden….its just that Syaf’s art was what pulled me into this in the first place, and now that’s gone.

CONTENT: Mild language. Some gory violence and creepy creatures. Some non-explicit sexual content, including a set of corpses still locked in a very sexual position and some discussion of prostitution. Occult-wise….Harry’s a wizard. You know up front what you’re getting into with this one….

Review: “The Dresden Files: Welcome To The Jungle” by Jim Butcher and Ardian Syaf

I’m a huge fan of Jim Butcher’s The Dresden Files. You may not have picked up on this, since there’s only really been one book in the series come out since I started doing this review blog, but I await each new release for this series with a fervor previously reserved for new Star Wars books. For me, the start of the series was the Dabel Brothers comic miniseries Welcome To The Jungle. Conveniently, this miniseries/graphic novel (depending on whether you’re reading the individual issues or the hardcover collection) acts as a prequel to the first novel. Now, whether you’re a longtime Dresden reader or are only just discovering the distilled pure awesomeness that is this series, I highly recommend tracking down a copy of this one.

When the Chicago PD have a case they don’t know how to explain, they give it to Karrin Murphy and the Special Investigations division. When Murphy thinks there may actually be something supernatural going on, she calls in the only practicing wizard in the Chicago phone book–Harry Dresden. This time, there’s a dead guard at the Chicago zoo. Throat ripped out by a beast with maniacal strength, blood everywhere…including the gorilla cage, which is why the official story is that the gorilla did it. But something doesn’t fit…namely, the gorilla was still in his cage with the gate locked when the body was found. Now unless Harry can figure out just what went down the innocent ape will be euthanized and the killer will go unpunished, free to pursue his or her devilish plot….

I can’t praise this enough, honestly. The writing is pure Butcher, as good as you would expect from having read the Dresden Files novels. There’s all the wry asides, self deprecation, vile monsters and supernatural action that Butcher can throw at you, with the added bonus of being able to visualize the characters and situations. The visual element of the story is really put to full use, especially in the sequence where Harry is running through his list of creatures capable of the violence at the zoo. Also, Harry is freaking tall! It’s one thing to have him tell you this, but to see the way he towers above all the other characters is pretty fun. This is completely consistent with the books too, which is nice. I’m not a huge fan of the collection cover, honestly, which is why I went with the cover to one of the individual issues for the top of the post.

CONTENT: Mild language. Violence, sometimes disturbing and bloody. Mild sexual innuendos, nothing too explicit. Occult content….well, Harry’s a wizard. There’s quite a bit of magic, usually operating through Harry’s pseudo-latin spells. My favorite is “flickum biccus,” his spell for lighting the candles about his apartment. There’s a Black Dog, from Celtic mythology, mention of vampires and other stock fantasy creatures, and the implication that Greek mythology has at least some grounding in reality.