Review: “The Prison In Antares” by Mike Resnick 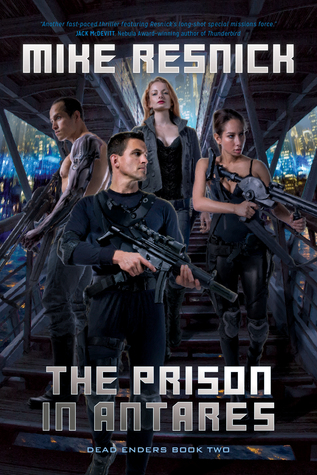 Colonel Nathan Pretorius is the best agent the Human-led Democracy has in their war with the alien Transkeii Coalition. Fresh from a suicidally-difficult mission behind enemy lines that went off without even the slightest setback, Pretorius and his team are given a new assignment: rescue or eliminate a scientist captured by the Coalition before he loses the entire war for the Democracy. This time around the team is joined by Iris “Irish” Fitzhugh, a psychologist tasked with determining whether or not their target has given up vital information before being rescued. The rest of the Dead Enders all reprise their appearances from the previous book: contortionist and thief Sally “Snake” Kowalski, cyborg strongman Felix Ortega, computer genius Toni “Pandora” Levi, part-alien empath Circe, and the alien shapeshifter (kind of) nicknamed Proto.

The Prison In Antares is the sequel to Mike Resnick’s 2014 novel The Fortress In Orion. Resnick has an impressive reputation in the sci-fi community, with five Hugo wins and over thirty nominations, so I had high hopes. Too high, as it turned out. The first book was marred by a plot where a seemingly-impossible mission was pulled off without a single setback or casualty. This time around Resnick has at least somewhat improved on the failings in the last book, but not enough. This time the mission doesn’t go off without a hitch, there are setbacks and obstacles that the team must deal with, and the mission isn’t without casualty either. Unfortunately, some of that difficulty comes about because the apparent intelligence of the characters seems to have been markedly reduced between books. Casualties, when they do occur, spur from characters making idiotic mistakes instead of meaningful moments of self-sacrifice or calculated risks to achieve a desired end. The book is still fun and entertaining, and Resnick’s reputation suggests that this series is not representative of his work, but I’d start someplace else in his bibliography.