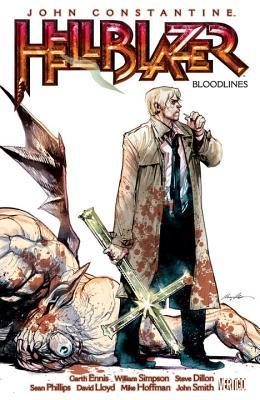 Ummm….yeah, I have no idea what’s up with that cover. It appears to be Constantine standing over a demon he’s beaten to death with a crucifix. Just so we’re clear, that never happened here. Which is kind of a shame, now that I think about it….This is mostly a patchwork anthology, one-offs and shorter story arcs. Most of them were good, a couple not so much.

When last we left our antiheroic mage, he’d just conned the three princes of Hell into healing his fatal lung cancer lest they be forced to go to war over his soul. Needless to say, they’re not too happy about being outwitted by a mortal…. Constantine’s going to have to get back in the saddle pretty quickly, though, as the magical catastrophes aren’t taking a break. First up, its stopping a pair of poltergeists after an insurance scam turns deadly. Will Simpson’s art is great in part one (The Pub Where I Was Born), but I wasn’t a fan of Mike Hoffman’s in the second half (Love Kills). Next Constantine explores the “real” meaning of Christmas (i.e. getting hammered and laid, possibly but not necessarily in that order) in Lord Of The Dance. It is alleged that the titular song (“Dance, then, wherever you may be….”) was not originally about Christ but about a pagan spirit of revelry, who was in effect neutered by the coming of Christianity to the British Isles. Steve Dillon’s art was good, and I managed to be (mostly) unoffended by the slurs against my own worldview. It’s par for the course when reading certain series…. A couple days later in Remarkable Lives, Constantine is summoned in the middle of the night to a darkened park where he finds none other than the King of the Vampires trying to recruit him. Obviously, that goes real well…. Will Simpson once again handles the art, and does an excellent job of it for the most part. This is followed by the only story in the book that I actually disliked, Counting To Ten. John Smith serves as guest writer, while Sean Phillips handles the pencils. Honestly, I’m not sure I get this story even on a second read-through. Something with a dead woman who isn’t dead, and a friend of Constantine’s in need of an exorcism. There’s no tie-in to anything else, no payoff or fallout from the events therein described. I’m gonna try and pretend it never happened…. Next up we get the closest thing to a main story this volume offers, the four-part arc Royal Blood. In London, the Caligula Club caters to the every twisted, perverted whim of the rich and famous, from bloody cocktails to catfights all the way to matters of the occult. Last night they summoned up the demon responsible for the Ripper killings, and it possessed the heir to the throne. Now  they’re loose on the streets of London, and the body count is rising….Will Simpson’s art is excellent, if morbid, and I have to wonder if Ennis consulted Alan Moore about using the plot of From Hell as backstory. This Is The Diary Of Danny Drake was a particularly disturbing tale, drawn by the legendary David Lloyd, featuring a man being haunted by his diary. Yeah, you read that right. It makes sense in the story, kind of. Mortal Clay/Body And Soul features Steve Dillon back on the artwork, this time exploring a shady munitions testing firm that’s graverobbing to help provide test corpses. Problem is, they’ve made off with the corpse of Chas’s uncle, and that’s got Constantine after them…. The two-part tale Guys And Dolls sees the First Of The Fallen put in place the first elements of his latest scheme to lay low our favorite antihero, this time using a young succubus of Constantine’s acquaintance. Trouble is, Chantinelle has no interest in revealing just how she met Constantine, as that conversation would go very poorly for all involved. Seems she’d fallen in love with an angel a few years back, and Constantine managed to save her skin. But can he do it again? Find out in She’s Buying A Stairway To Heaven! I look forward to seeing what happens next as Constantine readies for war with Hell once more….

CONTENT: PG-13 grade profanity, missing R-rated by the strategic placement of word bubbles. Some moderately explicit sexual content and nudity, including a shot of Constantine’s ass as he uses a urinal. We all needed to see that…. Strong, gory violence, frequently disturbing. Strong occult content, par for the course in this series.