I was going through some old Star Wars Insider magazines the other day, and I ran across this short story. I don’t know how I missed it before, but I did fall pretty far behind there for a while and am only just catching up. Anyone who’s watched much of the Clone Wars series probably remembers the bounty hunter Cad Bane. You know, the guy with enough brass to stage a heist in the Jedi Temple itself, proceeding to kidnap several Force-sensitive infants, busted Ziro the Hutt out of the slammer on Coruscant by taking several senators hostage, and then proceeded to sign on for a mission to kidnap Palpatine himself? He’s a cool character, to be sure, and this tale picks him up as he’s just first trying to make a name for himself. War is coming, Bane is sure of it, and that means money up for grabs….if one has the nerves and the reputation to claim it.

For most of the story, from Bane’s musing on the state of the GFFA to his sparse dialogue throughout the tale, Bane’s voice is spot-on. I could almost literally hear it in my head as I read. The story also explains why he has so many gadgets that we see almost nowhere else in the entirety of the franchise, such as the rocket boots he’s rocking while everyone else wears heavy jetpacks.

Trying to place this into the timeline of the Galaxy Far, Far Away illustrates the slightly awkward position the division of the canon puts me in. Officially, anything published before the cutoff date that isn’t the films or the actual Clone Wars cartoon is considered “Legends” canon. However, the Clone Wars cartoon (and thus all related material) doesn’t fit with the previously-established “Legends” timeline for the Clone Wars. Thus, I’m choosing to be slightly rebellious and include the Clone Wars tie-in material in the official canon timeline. Cool? Cool. Anyway, this story is set just a scant two years before the outbreak of the Clone Wars. (That’s 24 BBY for my fellow Star Wars geeks….)

So far as I know, the only place to find this story is in Star Wars Insider #136, where it was originally published. 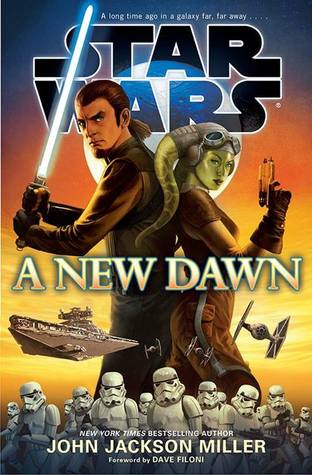 Much has been made of the fact that this is the first entry into the Star Wars Expanded Universe since Disney hit the reset button, despite the (apparently unnoticed) publication of several tie-ins to the series Star Wars: Rebels that preceded this. Even the title makes a reference to it. Maybe those don’t count because they’re not geared at adults. Anyway, all that hype is a little misleading. There is very little here that harkens the new era of Star Wars publishing. It was good, don’t get me wrong, but it had very little to do with the reboot. I’m pretty sure the book was mostly written already by the time that edict was handed down. That’s not its function. The place of this book in the ongoing Star Wars canon is to serve as a prelude to Star Wars: Rebels and introduce a couple of the main characters from that show. And it does that, superbly. Just don’t expect a grand departure from what came before, because almost everything therein was consistent with the Legends canon that existed before. There was no reason to foist major structural change on the book just to buck tradition and highlight the fact that there was a new sheriff in town.

The old order is dead. It died eight years ago, and when it fell it took everything Kanan Jarrus knew with it. He was just a Padawan at the time, only starting his journey to becoming a Jedi, but that didn’t matter to the Emperor when he issued Order 66. Kanan’s master sold her life to give him time to escape, and he’s been running ever since, floating from system to system, just avoiding the Empire’s notice, never in one place too long. He’s put his Jedi heritage behind him, and looks out primarily for number one even if he can’t resist sticking his neck out for a friend every once in a while. These days he makes ends meet flying transports loaded with high explosives between the mined-out planet Gorse and it’s still-rich moon Cynda as the companies scramble to meet Imperial quotas. Given how often they fall short, the Emperor has sent an envoy to see what he can do to speed up production. Cyborg businessman Baron Vidian made a fortune during the Clone Wars, and since has been working for the Emperor, smoothing logistical bumps in the rapid expansion of the Imperial Navy. The cost in sentient lives and suffering has been noticeable, and would-be rebel Hera Syndulla has followed him to Gorse in an attempt to learn all she can about Imperial security in general and Vidian in particular. When Vidian launches a coldhearted plan to speed up production at the expense of countless lives, Kanan and Hera will be thrown together in a desperate attempt to stop him. But can the massive might of the Empire really be resisted?

Like I said, I enjoyed this, and I’m if anything more excited for the launch of Rebels. The characters of Hera and Kanan were well-rounded and interesting, as were most of the assorted allies and acquaintances featured here. Unfortunately, the villain Denetrius Vidian was not nearly so nuanced as I’ve grown to expect from Miller’s work. He’s far from the only starkly-evil villain in the Galaxy Far, Far Away, but could have been given some more shades of gray. It didn’t detract from my enjoyment, but its still worth noting. The book was also notable for its inclusion of those incredibly rare creatures, female Imperials. There were several female stormtroopers thrown in (although not by name, and it didn’t make any difference to the story what gender they were), as well as the commander of Vidian’s Star Destroyer. I’m not sure if this is an attempt by the new Lucas Story Group to make the Empire more inclusive, or just Miller trying to even the playing field a bit. The only thing here that really conflicted with previous canon was the inclusion of Depa Billaba as Kanan’s former master when previous canon had established her as lying comatose at that point in the timeline. Obi-Wan makes a pointed comment in the prologue about the various “legends” contained in the Jedi archive, but that’s about the only nod they make to the reboot issue aside from the title. In case anyone’s interested, this is set eight years after Revenge Of The Sith, six years before Rebels and eleven before A New Hope.

CONTENT: Mild language. Some violence, not all that gory or gratuitous. No sexual content, but Kanan flirts with every female he meets–occasionally, as in the case of the Star Destroyer’s captain, just to annoy them and get them to leave him alone.