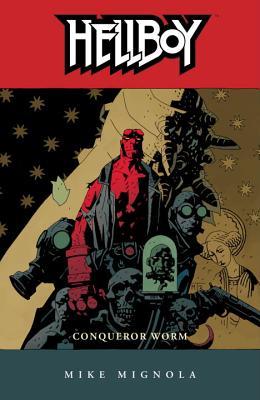 Yay! More Hellboy! Have I mentioned that my library is totally awesome? They got in another three or four volumes of the adventures of everyone’s favorite monster-fighting….er, monster. I’ve mentioned my affection for this rebellious demon before, here and here, and now there’s more to read! So without further ado, Conqueror Worm.

In the early days of WWII, while Rasputin was scheming to bring Hellboy to our world, Herman Von Klempt and some of his colleagues sought a more direct route to the apocalypse. There are non-corporeal beings living out among the stars, many of whom would love to end life across the universe if only given a body. The Nazis sent them one…a dead man, a hollow shell they could inhabit. Now that capsule is heading back to Earth, bearing with it the conqueror worm….

Not sure why, but this one just didn’t quite do it for me. I can’t put my finger on it–we’ve got Hellboy doing his thing, intergallactic Lovecraftian beasties, another appearance by Herman the Head-in-a-Jar, even an undead early superhero dispensing justice (though it’s never explained why he’s resurrected just at this point in time). What’s not to like? I don’t know. I enjoyed it, really I did, it just wasn’t quite as awesome as some of the other Hellboy stories I’ve read. It’s still a worthy addition to the series, and an important one too–we’re given a bit more insight into the Ogdru Jahad as well as those funky aliens we saw standing guard over their prison in the first volume. I look forward to seeing where Hellboy goes from here, especially since….well, that would be telling….