Review: “Eye Of The Draco: Darkfall” by Kadin Seton 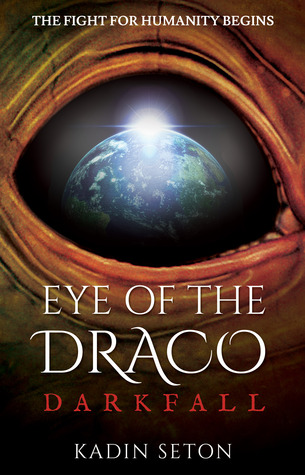 I have to admit, this one has me a bit conflicted. On the one hand, there were a number of things that kind of bugged me about this book. On the flip side, I couldn’t stop reading it. Seriously, I read almost half of it at one sitting, staying up long after I had intended to be asleep. Add that to the fact that I only just realized that this was a self-published book, and it definitely earns its four stars. Maybe it deserves five–the things that bugged me are mostly matters of personal taste, after all, but then again reviewing is largely a subjective practice so I’m just going to stick with that rating. I received a free digital copy from the author in exchange for an honest review, but that had no impact on my assessment except to ensure that I got to read the book.

The world as we know it is done for. The Draco, alien invaders from a distant star, struck before we could react, purging the Earth of its inhabitants while leaving our infrastructure intact for their own use. Within days, most of the population was dead. Now the only thing standing between the Draco’s colonization efforts and the utter extermination of humankind are a few small resistance groups scattered here and there. Alison “Allie” Spencer belongs to perhaps the most unlikely of all of these groups–a paramilitary organization of children, commanded by a prematurely-greying nineteen-year-old, spending their days hiding in basements and by night trying in vain to figure out how to hurt the invaders. It seems an impossible task, as the Draco are all but invulnerable to our weapons, but that’s not stopping them from trying. But against the might of an interplanetary invasion force, what can a handful of kids do? They’ll be hard pressed even just to survive, let alone strike back…until an astonishing discovery changes everything….

Like I said, there were a few things that bugged me about this book. The fact that I couldn’t stop comparing it to the TV show Falling Skies, for one thing. For another, a couple high-school science geeks armed with scavenged books, electronics, and a single piece of Draco tech are able to reverse-engineer a connection to the invaders’ wireless power grid while the underground US government is as stumped as ever? That strains my suspension of disbelief. The nineteen-year-old “General” of Sector Three is starting to go grey? Did you really have to do that in order to make him distinguished enough that we readers would respect him? Give me some credit–he’s pretty bad-ass, and I liked him just fine without that incongruous detail.* Most annoying to me, personally, was the interpersonal drama being set up for the next book. I have a deep personal disdain for that most popular of devices in nominally-YA literature, the “love triangle.” Don’t ask me why, I don’t know. It just bugs me. Here, the author is setting up not a triangle but a square, possibly even a pentagram if reports of a certain character’s death turn out to have been greatly exaggerated. Moreover, the book ended on a “down” note that just left me depressed.

Like I said, I couldn’t put it down. The annoyances were minor in comparison with how gripping the plot turned out to be. Sure, some elements were a stretch, but I didn’t really care at the time. It mirrored some elements from Falling Skies, but I liked that show, and a number of those elements are tropes now anyway. And the “love pentagram” really didn’t come into play until the very end. Beyond that, this is hands down the most professional self-published novel I have ever seen. The cover art is far beyond what I’m used to seeing in these cases, even if the eye there depicted once again recalls the Skitters from Falling Skies. I don’t recall seeing a single typo or bungled punctuation mark in the entire book, which is sometimes more than I can say for actual professionally-published books. Most importantly of all, the book was just plain fun. Will I read the sequel when it finally comes out? Most certainly! I look forward to it, in fact….

CONTENT: Occasional R-rated profanity, not prolific but nevertheless present. Explicit but not gratuitous sexual content. Strong violence, consistent with the war being waged.

*While leading a teenage resistance to an alien invasion would most certainly be stressful, contrary to popular myth studies show zero evidence that stress causes grey hair.