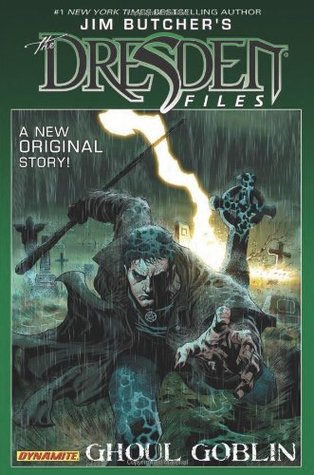 After producing comic adaptations of the first two Dresden Files novels, the creators decided to go in a different direction: original stories starring Dresden instead of just adapting preexisting tales. Personally, I’m in favor of this decision, since my favorite of the comics so far was the prequel that was set before the series began. And thus we get Ghoul Goblin, an original adventure set several months after the events of Fool Moon, taking Harry Dresden away from the Windy City and all the way to Boone Mill, Missouri in defense of a family of orphans.

Nearly a century ago, Major Archibald Talbot had the spectacularly bad sense to insult and offend a cadre of Egyptian mystics, a lapse in judgement that led to a nasty curse being placed on him and his entire bloodline. Ever since, Talbots have tended to draw supernatural trouble like flies to a rotting corpse. Today, all that remains of the Talbot bloodline is a single family…and the last week has seen two of the seven orphaned siblings die under mysterious circumstances. Can even Harry Dresden manage to protect the remaining Talbots and lift the curse? You’ll have to read on to find out!

On the whole, I really enjoyed this. It fit well into the larger Dresden universe, referencing other events and maintaining its connection to the series as a whole without making you feel lost if you were a new reader. It was interesting to see a few future elements foreshadowed too, such as Harry’s fight with a creature that just might be first contact with the Fomor. The art was great, if not as striking as Ardian Syaf’s in earlier books. (I’ll stop whining about that someday, I promise….) Syaf did come back long enough to do the covers, though, so that was better than nothing I suppose. 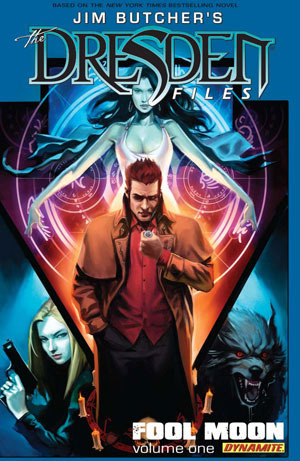 By now, I shouldn’t really have to explain my absolute love of Jim Butcher’s masterwork, The Dresden Files. I think I’ve made that abundantly clear on a repeated basis, whether reviewing the last couple books in the series (Cold Days, Skin Game) or either of the previous graphic novels–the prequel Welcome To The Jungle and the adaptation of the first book in the series, Storm Front. And now we come to the graphic novel adaptation for book two: Fool Moon, again in two parts that I will review together here. The general consensus among fans of the series is that the first two or three books are merely good, while every book after that goes up in awesomeness by something like an order of magnitude, and I largely agree. It’s been quite a while since I read the actual novel version of this (which means it’s time to go back and re-read the entire series!), but from what I remember this seemed pretty faithful to the book.

Harry Dresden is having a bit of a rough patch. I know, what else is new? With their friendship still strained by the lies he told to protect her back in Storm Front, Murphy has been calling him in for jobs less and less, which means that Harry is having to scrape the bottom of the barrel to find money for rent. All the same, Chicago has been mostly quiet on the supernatural apocalypse front, and for that Harry is grateful. Alas, it can’t last. People are dying at every full moon, and even a rookie would know what that means–there’s a werewolf in town. Harry had better figure out what’s going on quick, before more people end up as dog food….but that’s not going to be easy with “Gentleman Johnny” Marcone on his tail, along with a crew of suspicious Feds watching his every move, Murphy still not sure she trusts him, and a lycanthropic street gang out for his head. Why can’t it ever just be simple? Oh, right….because that’s no fun…. 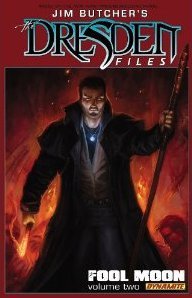 Like I said above, this was pretty faithful to the book. The only thing really missing was Dresden’s snarky humor as he narrates, and I’ll admit that I missed it a bit. The real downfall here though, and what cost it that fifth star, is the artwork. It wasn’t atrocious, it wasn’t even really objectively bad, but I didn’t like it. Partially, yes, it’s the fact that I still miss the stellar work of Ardian Syaf. I recognize that, and I need to get over it. But then, I don’t tend to be a fan of this particular style of art anyway. There’s also the fact that half the time I can only tell Murphy from Tera based on their clothes, and the female characters tend to be over-sexualized even when that’s not a part of their character. Susan, I get that. That’s how she is. Tera, likewise. As much time as she spends without clothes on shifting back and forth or as a distraction, I can see why she would be sexualized. I’m less understanding of Kim’s neckline–that’s not the kind of relationship she has with Dresden–and I highly doubt that Murphy would dress quite so provocatively (even if she’s fairly conservative compared to the others). There’s never quite anything that would send the book into Vertigo territory (were this DC), but the shadows and foreground objects get quite a workout keeping this book PG-13.

CONTENT: Brief R-rated language. Some gory violence. No outright nudity, thanks to incredibly-convenient shadows or foreground objects, but so close it’s almost no difference. Also….Dresden’s a wizard. There’s gonna be magic. You’ve been warned.