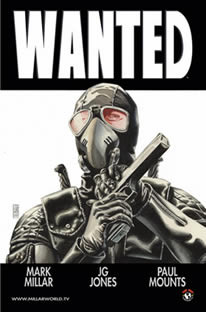 Every once in a while you run across a book like Wanted. Well written, excellent art, genius premise, a smart story and interesting characters….and a stated goal of offending every sensibility you have. In that, Wanted certainly succeeds. Am I recommending you go read it? That depends on who you are and how easy you are to offend. This one’s not for everyone. It’s been billed “Watchmen for super-villains,” if that tells you anything.

Wesley Gibson is the ultimate loser. His girlfriend is cheating on him with his supposed-best friend, he has a dead-end job with a boss who chews him out regularly, he’s a hypochondriac, and to top it all off he seems to be a clone of Eminem. But all that changes when a woman named Fox upends his life. It seems that Wesley’s father was the Killer, one of a cabal of super-villains who have secretly run the world since 1986. Now the Killer is dead, and Wesley stands to inherit not only his worldly possessions but also his place in The Fraternity. Before you know it, Wesley is a whole new person with a whole new set of…well, maybe not friends. Associates might be a better word. Tensions are rising within the Fraternity. After years of peacefully keeping the world subjugated, certain members are getting tired of living behind the scenes. Civil War seems eminent, and there’s no better time to be the Killer….

Imagine suddenly having the ability to do whatever you wanted, with absolutely no consequences. Blow away a restaurant full of people? Police have no suspects. Make your “friend” who’s cheating with your girlfriend disappear? Doesn’t even make the news. Whatever your fancy, it will be covered up. How? Because the super-villains are ruling the world. Do you remember the Heroes? No, of course you don’t. They’ve been relegated to cheesy TV shows and comic books. They never really existed. Or at least, that’s the story now. Turns out that in 1986 all the super-villains – ALL of them – teamed up and took down the mighty Heroes, rewriting reality so that they never even existed. A certain pair of caped crusaders now think they just played those characters on TV, and the world’s greatest hero spends his days in a wheelchair staring out the window at a world that has forgotten him, wondering just what he’s trying to remember. The gang’s all here, given a gritty update and with their names changed to protect the author from lawsuits. Some of them are recognizable, others less so. Remember Bizarro? The failed clone of Superman that turns everything opposite? He’s been translated into [REDACTED]*, a “Down’s Syndrome copy of the world’s greatest hero.” Clayface? Try [REDACTED]*, a creature made up from the feces of the world’s six-hundred and sixty-six most evil beings that have somehow become sentient. There’s more in the same vein. Fox is clearly Catwoman stuck in Halle Berry’s body. (No, I have no idea whether that’s a coincidence. The comic was released first, but I don’t know how far back the casting for Catwoman was announced.) Mister Rictus is a darker take on the Joker, a former priest who died for a few moments only to find that there’s nothing waiting on the other side. Now? Now he does whatever he wants, eats what(or who)ever he wants, fornicates with whatever he wants. Currently? He wants to take America from his old rival Professor Solomon Seltzer….

The content here is over the top offensive. There’s the obvious profanity, sexual content and gore, but there’s also adapting DC’s Bizarro to have Down’s Syndrome (and then making fun of him), or putting not-Superman in a wheelchair….just like the guy that used to play him in the movies. At the same time, the premise is genius. The characters are all incredibly well executed. The plot is a purposeful inversion of Campbell’s “Hero’s Journey” theme. This is an incredible piece of work….except for how offensive it is. So, should you read it? I’ll let you decide.

CONTENT: R-rated profanity throughout. Explicit sexual content, including references to rape and bestiality. Strong, gory violence. Not for children!