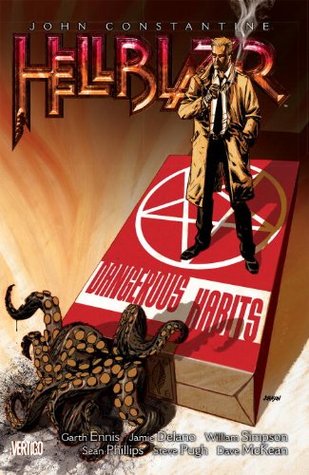 I’d kind of prefer to review this one as two separate volumes, because midway through the book the entire production team changed. This is tied into a single collection largely for convenience, but its pretty much two separate stories. I was less a fan of the first half, which is where it lost a star, but the second half was probably the best bit of the series I’ve read to date. Remember the Constantine film with Keanu Reeves? Yeah, I know, you were trying not to. Sorry. Anyway, they pulled a significant number of the subplots for the film from this volume–specifically, Constantine’s fatal lung cancer. It was resolved a bit differently though….

We start the book with Jamie Delano firmly in the seat as writer, with a  rotating roster of artists. Following on after the events of The Family Man, Constantine’s in a rough place emotionally–he’s just killed a man, which is never easy, and to top it off his estranged father was one of the casualties. Catching up with Marj and Mercury, he tries to lose himself in their nomadic lifestyle, but only manages to pull Mercury into his nightmare flashback to his childhood. I wasn’t a huge fan of this three-issue arc, drawn by Sean Phillips. That wasn’t really Phillips’ fault, mind you, though I wasn’t a huge fan of his art either. It was more about the dark and depressing tone. I know, I know, it’s a horror book, what do I expect? I just didn’t like it. Sue me. Steve Pugh then takes over the pencil as we meet Martin, a sensitive young vegetarian, and his sadistic butcher of a father. Of course their paths are bound to cross with our protagonists, though this particular two-issue arc is more focused on Mercury than it is on Constantine. Again, not a huge fan of either the story or the art, at least a little because I wasn’t all that engaged. Martin was kind of pathetic, literally, and I happen to be pretty disdainful of the vegetarian propaganda that was most of this tale. Also, I’m pretty sure that the butcher in the tale needs to be arrested for a whole multitude of crimes, from domestic abuse to health code violations. Pugh continues to draw the first half of the next arc as Constantine attempts to explore his missing half, the Golden Boy, his twin brother who died with their mother in childbirth. The second issue, drawn by Dave McKean, gives us an alternate universe where the other twin lived. Far more successful than the John Constantine we know, he has managed to come out ahead in several of the same conflicts that our John only barely survived, even saving some of his friends along the way. Now he leads a pagan commune, their wise and beloved Magus, but even still he is haunted by the spirit of his lesser, sickly brother who died in the womb. The art of Dave McKean is a bit of an acquired taste, since it is so weird, and I’m not really a fan. I do have to admit that it fits the series well, however, and this tale seems to have achieved a legendary status among fans of the series.

Immediately following on (and with no real transition from that really strange ending) Garth Ennis takes over the writing chair, with Will Simpson picking up the pencil. So what do you do when you’ve just been handed the lead writing position on a well-revered title? Well, if you’re Garth Ennis you promptly try and kill the main character….Those thirty silk-cut cigarettes a day have finally caught up with our favorite anti-hero. He’s dying of lung cancer, and there’s not a thing he can do about it. Not a one of his magical tricks can save him. It’s far beyond his power, and there are very few beings he can turn to for help. Even fewer who would be willing to do anything…. This arc is hands-down my favorite so far. The first issue as Constantine tries to wrap his head around his own impending mortality is incredibly poignant, and the consistency of having a single artist (and a good one at that!) really helps the series in my opinion. I think my favorite bit was the second issue of the arc, though, as Constantine visits an old friend in Ireland and ends up having an ill-fated meeting with one of Hell’s rulers, the First of the Fallen. (I presume this is Satan, though I’m not sure how that jives with Lucifer from Neil Gaiman’s Sandman comics, which are supposedly in the same universe.) There should be no surprise that Constantine manages to wiggle out of his predicament–the series ran until just a couple years ago, after all–but knowing that doesn’t detract at all from the impact of this story. I look forward to seeing what happens next as Ennis adjusts to his new job….

CONTENT: Some grotesque and gory violence. Some strong profanity, especially of the British variety. This time the sexual content was largely implied as opposed to explicit, but it was there nevertheless. Obviously there is quite a bit of occult content, as you would expect from this title.