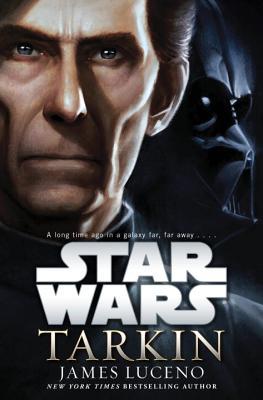 So, here’s the newest entry in the Star Wars publishing empire. This time we’re treated to a biography/character study of Grand Moff Wilhuff Tarkin, the man behind the Death Star. You don’t remember him? He was the guy in Star Wars: Episode IV–A New Hope that got to boss Vader around without getting choked, masterfully played by the inimitable Peter Cushing. Cheekbones like razor blades? Ringing a bell? If Vader is the Emperor’s crushing fist, Tarkin is his knife in the dark–deadly, precise, and without mercy.

It’s been five years since the end of the Clone Wars and the rise of the Emperor. For most of that time, Tarkin has been occupied shepherding the Emperor’s pet project: the as-yet-unnamed planet-sized mobile battle station. Keeping such a large construction project on-task and supplied is no mean feat, even for one of the Emperor’s most trusted lieutenants. Keeping it secret is next to impossible–anyone who’s paying attention knows something is going on out by Geonosis, they just don’t know what. Fortunately, most everyone with enough information to know what questions to ask knows better than to do the asking, and that’s the way Tarkin likes it. Once it’s operation, the mobile battle station will render the Empire’s rule unshakeable. Until then, the Empire’s infallibility can only be maintained by meeting any and all dissent with stiff, merciless reprisals. A new order has been born out of the chaos of the Old Republic, and Tarkin will do whatever he has to do to safeguard it and nurture it to maturity.

James Luceno is known for his incredibly detailed entries into the Star Wars mythos. Earlier endeavors chronicled the rise of Palpatine and his master in Darth Plagueis, somehow showing the behind-the-scenes maneuvering that led to basically every single Expanded Universe entry set during the period leading up to The Phantom Menace. He’s given us the biography of the Millennium Falcon (yes, you read that right). He’s given us Darth Vader adjusting to his new role in Dark Lord: The Rise Of Darth Vader. Some have criticized a few of his works as being slow at times, which I can see, but I’ve never minded–the attention to detail is worth it. Here, however, nobody has room to complain. Luceno weaves together a pair of compelling narratives, balancing them and always keeping you guessing as to where he’s going to go next. On the one hand, there’s Tarkin & Vader’s pursuit of a suspiciously-effective rebel cell. On the other hand, there’s Tarkin’s backstory, the events that forged him into the Emperor’s finest weapon.

Just as interesting as the new information it provides is the old information rehashed. Why? Because most of it comes from sources that are no longer officially canon. However, thanks to the shout-outs in Tarkin, we can unofficially assume that the events of Darth Plagueis, Dark Lord, and Cloak Of Deception all happened more or less as stated. The books themselves aren’t canon anymore (or at least I haven’t seen anything reinstating them), but the events therein contained still happened. Funny, all those books were written by Luceno….