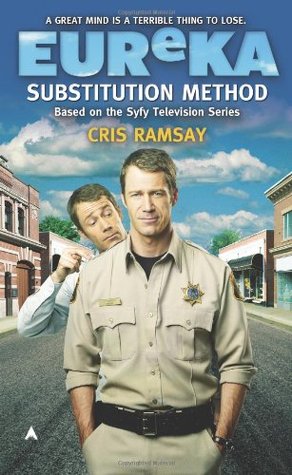 Media tie-ins are a tricky business. They aren’t meant to be great literature–they aren’t even really intended to appeal to a wide audience. They cater to the tiny segment of the populace who watched the original source and wants more. If the book is just a rehash of a popular film, there’s usually little point to giving it the time required to read it. On the other hand, there are times that the book transcends the source material and adds something new. Getting inside Anakin’s head in the Revenge Of The Sith novelization? That story almost made sense after that. Almost. With regards to TV series, a tie-in can offer a chance to do something that the time or effects budget of the show wouldn’t normally allow. In such a case, the highest praise you can offer is that it felt like another episode of the series. That was my experience reading Substitution Method. Though that cover image has nothing to do with anything….

Okay, let me get this out of the way: if you haven’t watched Eureka before, you really should. It’s a great sci-fi comedy series. The basic premise is that Einstein and a bunch of his fellow world-changing scientists founded a town after WWII where they would all be in one place to share ideas, resources, and security measures. The result is a town full of super-geniuses who have a habit of letting their projects get out of hand. Jack Carter is the everyman sheriff of this town, and it certainly keeps him on his toes. If he isn’t trying to shut down some girl’s escaped mini-sun science project before it goes supernova and vaporizes the entire hemisphere, it probably means he’s busy trying to undo the consequences of that latest button Fargo couldn’t resist pushing. For obvious reasons, you need a truly frightening security clearance just to know Eureka exists. Which is why it’s especially troubling when people and buildings in Eureka suddenly start being swapped with people and buildings out in the wider Pacific Northwest….

Like I said, this very well captured the feel of the show. All of your favorite characters show up, even a bunch of the background characters we only met for that one episode when their project threatened the existence of life on the planet. The central gimmick of the novel was something suitably beyond the scope of the show’s effects budget without feeling forced or out of place in this universe, and the mini-subplot of Carter questioning his place in Eureka now that Zoe’s in college was something that you’d never get from a show that eschews inner-thought voice-overs. Oh! And in case you care, this is set between seasons three and four.

CONTENT: Pretty consistent with the show, which maintained a PG equivalent throughout its run. Some mild language. The threat of violence or bodily harm, what a kids’ movie might describe as “mild peril” in its rating description. Mild sexual innuendo, but nothing anywhere nearing explicit. If you’ve followed my reviews for very long, you are aware of my nearly fanatical love of science fiction as a genre, be it novels or movies or television. For five seasons on the cable network Sci-Fi (or SyFy, as it has rebranded itself) Eureka offered one of the more entertaining television shows in this genre.

Somewhere in the Pacific Northwest there is a town you won’t find on any map, a town where the nation’s most brilliant scientists are all gathered together in one place to better harness their combined genius, working together at the government-funded Global Dynamics in a nurturing environment that would be otherwise difficult to create. Not that everything goes smoothly in Eureka, by any means. If that were the case we would have no show. Instead, we are treated each episode to experiments and projects gone thrillingly awry–from a personal shielding unit that refuses to shut off to an accidentally launched experimental unmanned spacecraft….that just so happens to be manned at the moment. Into this high-IQ environment is thrust former US Marshall Jack Carter (Colin Ferguson), the town’s newly-assigned sheriff, and his rebellious daughter Zoe (Jordan Hinson). Carter doesn’t always understand the science of what’s going on around him, but he does usually manage to come up with a common sense solution. Henry Deacon (Joe Morton) is usually instrumental in this, as both a brilliant scientist and Jack’s best friend in town. Global Dynamics is run by Nathan Stark (Ed Quinn), whose disdain for Carter may have less to do with Carter’s IQ and more with Carter’s interest in Stark’s ex-wife Alison Blake (Salli Richardson-Whitfield), the company’s liaison with the Department of Defense. Carter’s partner in protecting the town is Deputy Jo Lupo (Erica Cerra), an ex-Army Ranger with a love of weaponry some would consider disturbing. Douglas Fargo (Neil Grayston) begins the series as Dr. Stark’s aid, but soon gets a lab of his own despite his accident-prone nature. Apparently his file at GD contains the phrase “inappropriately pressed buttons” thirty-seven times, which is often the cause of whatever disaster is befalling Eureka this week. Notable guest stars include Wil Wheaton and Felicia Day.

If I have one complaint with the series it is that there is sometimes a lack of structure. Later seasons have a cohesive story arc running through, but while the earlier season do tend to have a recurring theme there is little other structure. The writers do such things as killing off a major character just a couple episodes into a season (something you would expect in a finale or premier, not three or four episodes in), and Carter’s love life is very inconsistent. He swings between pining after Alison and dating other characters, which wouldn’t be a problem except that in a couple cases the other woman simply disappears from the narrative with no wrap-up. There are occasional cases of time travel, and that tends to completely change the status quo in interesting ways–all good, but it feels a bit as if the writers ran out of stories to tell and threw a “Hail Mary” a couple times. Nevertheless, I really enjoyed the show and very much recommend it.

Content: I think this was probably TV-14 when it was broadcast. There is occasional violence or violent outcomes to the many malfunctions and disasters, occasionally gruesome and often played for dramatic effect. Mild language, nothing too extreme. PG-13 sexual content–references, characters heading off to the bedroom where we refuse to follow, characters in their underwear or with nudity obscured just offscreen or behind foreground objects. Stuff like that.