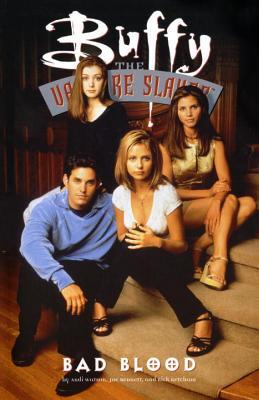 It’s been a while since I read any of these Buffy comics, hasn’t it? Got a bit sidetracked. Anyway, the Bad Blood collection contains a mere three issues (#9-11), the first part of a larger long-running arc. Andi Watson is still going strong as the writer, and Joe Bennett subs back in as the artist for this arc. These three issues are available either here or in Buffy The Vampire Slayer Omnibus Volume IV.

Life goes on apace for the Scoobies in these three issues. Nothing too life-changing happens in the parts of the story focused on our favorite slayer and her friends, as these issues blend a fairly episodic approach to the Scoobies with a long-game story featuring Selke, the vengeful vampire who got torched back in Cold Turkey. Hey Good Lookin’ (issues #9-10) sees Selke recruits an amoral plastic surgeon to try and fix her “cosmetic issues” while Buffy tries to balance tracking a band of ghouls who have been using the local cemetery as a diner with her surprising new gig: modelling! Then in A Boy Named Sue (issue #11) Buffy and the gang have to deal with an arrogant and duplicitous something-or-other, frontman for a band that rivals Oz and the Dingoes while being utter tools. Todd Dahl has decided that it’s time to add another “S” to his little black book of conquests, and he’s settled on our favorite Ms. Summers despite the fact that she’s not interested. Amy is, though, and she can be quite vengeful when spurned….

My reactions this time are…mixed. The art is definitely improving, even Xander is mostly recognizable. Probably a mix of the artist improving and me getting over my grumpiness with his appearance in these books. Everyone else is pretty well done though. Kudos to Mr. Bennett, he’s put my complaints to rest. The writing is where I have mixed feelings. On the one hand, it’s perfectly spot-on when it comes to dialogue and characters sounding like themselves. On the other hand, there are deep flaws in this story arc. I don’t buy that Joyce Summers would be considering plastic surgery–it just doesn’t seem consistent with her character. The plastic surgeon suddenly becoming adept at magic? Maybe, I can buy that, especially if he’s a quick study. He seems to accumulate enough arcane books quickly enough, probably from Selke. But being able to pull off a tricky translation from an ancient language? Not exactly something they teach at medical school. This is of course somewhat balanced by the sheer hilarity of his attempt to buy time by passing off a jar of mayo as some mystery salve. Why did he have a random jar of mayo sitting in his operating room? I have no idea, and for once I don’t care. The writing was occasionally quite abrupt, switching scenes without warning, and I think each of these issues could have benefited from another couple pages, but that’s not always an option. Timeline-wise, these still have to happen before Buffy S03E11: Gingerbread since Amy makes an appearance. Xander and Cordelia seem to be together, but that’s never explicitly said so I guess we just ignore that.

CONTENT: No profanity that I can recall. Vampire violence consistent with the Buffy television show. Some mild sexual innuendo, from tight clothes consistent with a comic book to a character attempting to seduce a girl (and then lying about his failure the next day), plus the requisite jokes when a male character gets magicked into a female. Buffyverse vampires could be considered occultic due to their demonic nature, but it didn’t bug me.