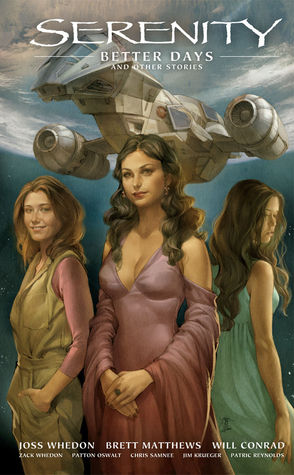 I mentioned my love of Firefly/Serenity last time, when I reviewed Those Left Behind, didn’t I? Anyway, if you’ve not checked it out yet you really should. Better Days is the second collection of Serenity comics, featuring a three-issue miniseries and (if you get the second-edition hardcover) three other hard-to-find tales to boot.

Most of this volume is set either during the television series or in the interim between the show and Those Left Behind, based on the characters present and their relationships. Better Days finds our favorite crew of ne’er-do-wells knee-deep in a heist, just like a thousand times before. Except this time…this time they strike it rich. Our crew can handle misfortune just fine, they do that all the time. But success? Success just might be the death of them…. As with the previous miniseries, this one felt like it was ripped from the screen, almost like it was supposed to be an episode of the show. The writing was spot on, and the art was awesome. The Other Half is a short little tale featuring our heroes attempting to transport a fugitive to meet his friends…while Reavers try and eat their faces. Again, the dialogue was stellar, and the central focus on River was a nice change. Downtime is another short episode, this time following our cast as they attempt to wait out a snowstorm keeping them from taking off. Difficult as it is to pull off in a story this short, every character gets at least a moment to shine. The art isn’t quite as pretty this time out, being a bit more impressionistic, but I enjoyed the tale nevertheless. Finally, and most heart-breakingly, Float Out is a one-shot tale set after the film and featuring the friends of a certain fallen character toasting their memories of him. I’ll refrain from further discussion in the interest of avoiding spoilers for those who’ve yet to see it, but that final page might just make you tear up all over again at the demise of [REDACTED]….

CONTENT: Mild profanity, unless you can read Mandarin Chinese. Then I imagine it would be R-rated. Strong violence. Occasional sexual content consistent with the show. 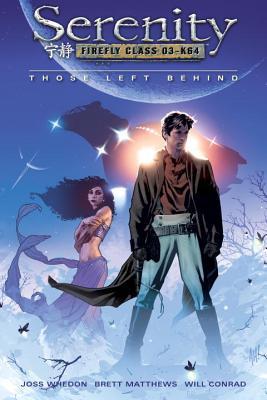 Yay Firefly comics! Okay, so they’re marketed under the title Serenity, after the theatrical follow-up to the television series, but they’ll always be Firefly to me. What’s that? You’ve never watched this most excellent, most canceled of sci-fi television series? What are you still doing here then? The series is available on perpetual rotation for free via Hulu, on Netflix, or on DVD from Wal*Mart for like ten bucks. You really have no excuse not to watch it. You won’t be sorry you did….

Okay, in case you’ve been living under a rock for the past decade, Firefly was a sci-fi television series developed by the inimitable Joss Whedon and Tim Minear for Fox Television in 2002. Following a series of debacles at the studio, including the decision to air the episodes all out of order, the series was canceled after only fourteen episodes. The show’s devoted fan base was devastated, and promptly started a massive grassroots campaign to save the series. Based on the sheer enthusiasm of this fan base, Universal Pictures took the then-unheard of step of contracting a theatrical follow-up to the television series. Ever since there have been persistent rumors that the series is coming back, but for now and maybe forever the Browncoat army (as we Firefly/Serenity fans are known around the interwebs) have to content ourselves with the stellar comics Dark Horse intermittently releases.

After the Earth was used up, Humanity found itself a new home in a massive star system with hundreds of planets and moons, terraforming each until it could sustain human life. The central planets formed the Alliance and successfully subjugated the entire system, crushing the Independents in a bloody civil war. Most of the surviving Independents have drifted out to the fringes of society, out where Alliance control is nominal at best, out where a ship under your feet and a gun on your hip will give you a chance to carve out a living for yourself and those that count on you….

Those Left Behind serves as the bridge between Firefly and Serenity, helping to wrap up a few of the discarded plot threads that didn’t make the cut for the film. Here we see Mal struggling with Inara’s decision to leave, as well as the catalyst for Shepherd Book’s own departure. On a more plot-related note, witness the reappearance of Agent Dobson and the identity of those sinister Alliance agents in the blue bodysuits…. The best compliment I can offer this book is that it legitimately blends into the rest of the franchise. The dialogue, timing, and characterization is all spot-on, easing the transition between the different media. The art is incredible too, so that helps. I could say more, but really it all boils down to this: Watch the show, read this comic, then watch the film. You won’t be sorry you did.

CONTENT: Minor profanity, including a good deal of cursing in Chinese. A fair amount of violence, gory and occasionally disturbing. Mild sexual innuendo, mostly as under-the-breath commentary and asides.