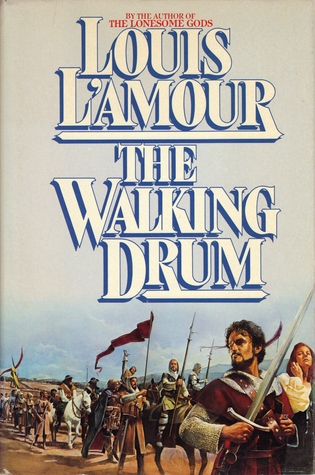 I’ve documented before my long-held fondness for the works of Louis L’Amour, and this particular book is no exception. Here you will find all of the adventure, excitement and historicity that has long been associated with the works of Louis L’Amour, but this time with a different setting. Most of L’Amour’s body of work is set in the Old West, or if not there at least on the American frontier as it existed at the time the story is set. The Walking Drum, however, is set in twelfth-century Europe, from Brittany to Constantinople and beyond. I am sure some of it’s impact on my memory has to do with it’s uniqueness among L’Amour’s works, but the fact remains that this is a well-wrought adventure novel with a wealth of historical gems hidden inside. My memory of it from childhood did not in the least do it justice. I very much wish that L’Amour had followed it up with the proposed sequel he was planning, but regrettably he died before he managed to get it written.

We join Mathurin Kerbouchard as a boy on the verge of manhood, his mother killed and his home burned by the evil local petty noble. His father, a legendary corsair, is lost at sea, rumored to be dead, but Kerbouchard doesn’t believe it. He resolves to find his father and enlist his aid in seeking revenge on the evil baron who burned their home. Of course, this is easier said than done. The ensuing adventure sees Kerbouchard as a galley slave and a noted scholar, a swordsman and a companion of princes, a merchant and lover to a princess, all culminating in a daring infiltration of Alamut, the fortress of the dreaded Assassins….

I can’t really offer too much of a description of the plot without major spoilers, as it is highly episodic. Kerbouchard embarks on one adventure after another, escaping one scrape simply to land in another. In some ways, Kerbouchard is the anti-Conan. Whereas Conan is an unschooled barbarian, come “to tread the jeweled thrones of the Earth under his sandaled feet,” Kerbouchard absorbs knowledge like a sponge thanks to the Druidic training passed on by his uncle. Both are skilled swordsmen, and both are incredibly popular with the ladies, but whereas Conan prefers to start the discussion with his sword, Kerbouchard would much rather exchange ideas. This isn’t to say that he won’t fight, but he would prefer to explore other avenues in most cases. As with any of his stories involving a boat in any way, L’Amour devotes considerable time to one of his pet peeves–the misconception that people believed in a flat Earth until Columbus showed them otherwise, with Kerbouchard ridiculing the idea at almost every turn. Another particular notion he perhaps over-emphasizes is the intellectual superiority of the Moorish culture to the close-minded twelfth-century Christendom that made a virtue of ignorance. I’d like to be offended, but he’s not entirely wrong. On the other hand, that’s no longer the current state of affairs, either–they were called the Dark Ages for a reason, however flawed the term may be.

Ever reread a book you read as a child and been blown away by how much you missed on your first encounter? That was this book for me. Dad held this one in reserve until I was considerably older than when reading the majority of L’Amour’s work, and now I can see why. Even though I totally missed it at the time, there is a level of sexual content here that is totally foreign to most of L’Amour’s bibliography. It’s not explicit by any means, and in at least a couple cases I can’t even tell when it occurs, but Kerbouchard pretty much beds every woman he comes in contact with. The subtext is clear, even as nothing is explicitly said. There’s some very pointed and ribald flirting, but on those occasions everyone remains firmly clothed. Kerbouchard’s musings later on, however, make clear that at some point during the overview time-is-passing-quickly sections he and whatever lady he was with at the time definitely got it on. Nine-year-old me totally missed that, but then nine-year-old me was pretty sheltered. Nine-year-old me also missed a lot of the historical content that now makes more sense to the twenty-something student of history, but that’s only to be expected.

CONTENT: There’s quite a bit of sex happening in the time-frame covered by this novel, but absolutely all of it happens between the lines and is completely non-explicit. Mild language. Some strong violence, but nothing particularly disturbing. Some musings on the ancient Druids, but nothing too occultic–we know too little, and L’Amour has too high a regard for accuracy to say much.

*This definitely deserves four stars. The fifth may be a stretch for some people, and I freely admit the possibility of a nostalgic bias. I just don’t care.