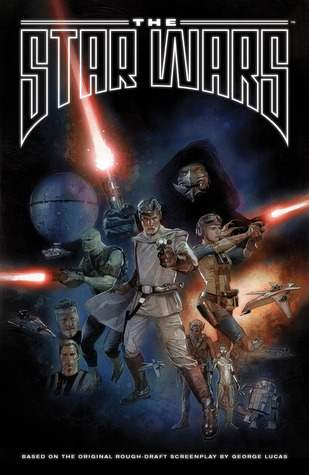 A long time ago, in a galaxy far, far away….

No, not that Galaxy Far, Far Away. This is a very different Star Wars than the one you and I grew up with. A maskless, non-Force-using Darth Vader leads the assault against Aquilae, the last holdout against Imperial power, whose military is led by the legendary Jedi-Bendu general Luke Skywalker and his apprentice Annikin Starkiller. Han Solo is a less-mossy version of DC’s Swamp Thing. Yeah, you read that right. This is an official comic adaptation of George Lucas’s original first-draft screenplay, and it bears almost no resemblance to the finished product. Some character names are the same, but their roles are almost all completely different. Other names and concepts would be dropped completely, only to show up later in a different place or form. The plot itself bears no resemblance to anything I’ve ever read, and I’ve read nearly all the Star Wars.

I want to say that this was awesome, but remember that part about it being the rough draft? Yeah, it’s still pretty rough. The dialogue is atrocious. The characters are a bit inconsistent in their behavior, from Annikin and Leia’s romance to one of the villains switching sides with little justification. Nevertheless, it is pretty fun to see what might have been….and the disaster that was averted. The art ranges from solid to incredible, and seeing the different designs for a different galaxy was pretty cool. Like I said, I’d like to recommend this, but I can’t.