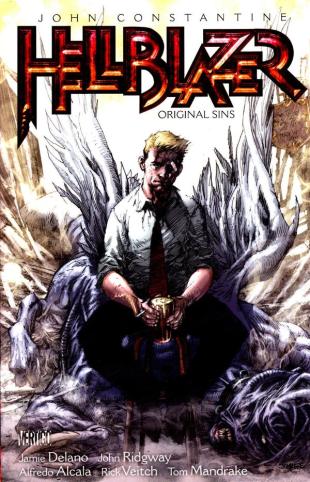 I’m ashamed to say that my first real encounter with the character of John Constantine was the decidedly mediocre 2005 film. Don’t get me wrong, I didn’t hate the movie, but I was unaware at the time (the time being years later when I actually saw it, not when it came out) that it had very little to do with the actual character it was based on. Constantine is blonde and British, not brown-haired and living in LA. That’s Angel. I say my first real encounter, because he did feature in one of the early issues of Neil Gaiman’s Sandman, but I had no idea who he was at the time. Anyway, I’ve been meaning to try this series for a while, so when I found the first volume at the library, I checked it out.

I can’t so much describe the plot to this collection, because there’s not much of an overarching plot to describe. The events described are loosely tied together, but at least for this first volume there’s no real resolution. (The library bought the first two volumes, so I’m hoping the overarching plot is resolved in the second one.) This is mostly about establishing the character and the world he inhabits. John Constantine is a powerful magician, but he doesn’t take much enjoyment in the fact. Magic and his own mistakes have cost him too many friends and loved ones, faces that literally haunt him both waking and sleeping. He’s a bit of a jerk–actually, more than a bit, and you could use stronger language if you wanted to–and has few moral qualms. About the only temptation he’s good at resisting is the temptation to walk away from a losing fight. Amateur magicians, the forces of Hell, the forces of Heaven, they all have a way of causing trouble. And Constantine just can’t help trying to stop them, whether it’s in defense of a friend or out of sheer curiosity. We’ve got a hunger demon, finance demons, a pedophiliac necromancer, time-slipped soldiers from the ‘Nam, the struggle between the Resurrection Crusade and the Damnation Army (the loose overarching plot that takes over halfway through), and a strange interlude featuring the Swamp Thing that I’m not really sure should have been included here. Constantine will take his licks and deal out some in return, even if it kills him. Or, more likely, even if it kills everyone he’s ever known….

I…had some issues with this. Some of these issues are clearly taste, while others are situational. Most frustrating for me, given my slight OCD over getting the whole story, is that this feels like you’re coming into the middle of the story despite it being the first volume. John Constantine was created as part of the Alan Moore run on Swamp Thing, and this spins out of that with Constantine reeling from the events of a particularly casualty-heavy story arc over there that is never really explained here. Also frustrating for me is the rather cynical view implicit to the events here that the forces of Heaven are no better than the forces of Hell. In fact, I would almost say that the Resurrection Crusade is more sinister than the Damnation Army! At least the forces of Hell are upfront about it–they’re demon’s! What do you expect? Look, I get that some televangelists are/were money-hungry frauds that give the rest of us Christians a bad name. That doesn’t mean you have to have to feature only the worst of the lot. Now, I do admit that it was not Heaven itself that was portrayed as sinister, but rather some of their earthly human agents, who don’t necessarily represent the will of God. It just rubbed me the wrong way, I suppose. I’m hoping this is handled better in the future. We’ll see. I could also do without the gratuitous commentary on ’80s British politics and social issues. I get it, there wasn’t a single British comic writer that approved of Margaret Thatcher! Can you stop slapping me in the face with it?

CONTENT: Quite a bit of language. No uses of the “F-Bomb” that I can recall/find, but everything else is used, including a heap of British profanity and slang. Harsh violence, occasionally torturous. Strong sexual content, including a rape and the implication of pedophilia (portrayed as horrific in both cases, not glorified), semi-explicit without going so far as outright nudity. Strong occult content, which should be obvious. Demons, spells, necromancy….it’s all here.