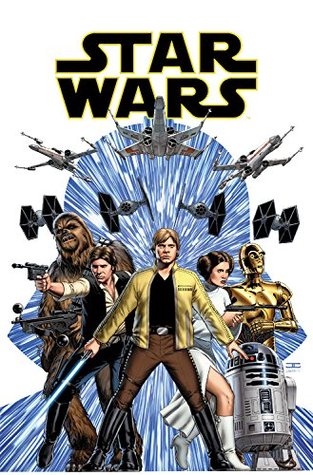 Okay, cards on the table: I loved the Dark Horse Star Wars comics. Almost all of them, especially anything featuring the team-up of Ostrander and Duursema. So I was very much saddened to see that company lose the Star Wars license. Not surprised, following the purchase by Disney, as that mega-company also owns Marvel. I figured it was only a matter of time, and that turned out to be the case. So I was saddened, just as I was saddened by the relegation of a bunch of my favorite stories to the status of Legends. But the one thing I never expected was that Marvel would drop the ball. I mean, it’s bleedin’ Marvel! If there’s anything they understand, it’s comic books. Now, having read the first arc of their eponymous Star Wars series, I can confidently state that my faith was well-founded.

We join our cadre of heroes as they attempt a daring assault on the Empire’s largest weapons factory, the entire planet of Cymoon I. Posing as a trade delegation from Jabba the Hutt arriving to negotiate renewed supply lines in the wake of the destruction of the Death Star, our heroes slip through security and set about rigging the automated factory’s reactor to blow sky-high. Everything is going to plan, until Darth Vader shows up to negotiate for the Empire….

I mentioned that this was amazing, right? The writing and art sync perfectly to sell you on the fact that you’re watching the continuing adventures of Luke, Leia, and Han. Luke is still a brash hotshot, still feeling his way with regards to the Force, and can be kind of whiny when he’s confronted with just how far he has to go. Han is just as sardonic and impulsive as ever, though the backstory they’re teasing for him may help ground him a bit. We’ll see how that one turns out. Leia is clearly in charge, driven to achieve justice for Alderaan and her family, and even Chewbacca knows to follow her orders. It’ll be interesting to see where they take her character in future arcs.

One potential point of annoyance for some readers is going to be how closely this series and the Star Wars: Darth Vader series that runs concurrently are tied. Events from one series are offhandedly referenced in the other with no explanation, and have major repercussions at times. For example, Vader fails to apprehend our Rebel heroes in this book, is chastised by the Emperor and hires Boba Fett in the Darth Vader book, and then Fett shows up in this book to try and capture Luke. Complicating matters further is the fact that there’s a particular order you need to read these in to get the whole story, and even then you’ll get ahead of yourself unless you stop in the middle of an issue at times. I wasn’t that annoyed by it, but I’d checked out the timeline first and knew what I was doing. (In case you were wondering, the proper order is Star Wars #1-3, Darth Vader #1, Star Wars #4, Darth Vader #2-4, and then #5-6 of both series happen simultaneously, both culminating in the same scene from slightly different perspectives.) This is set in the first year following the destruction of the Death Star, maybe a couple months at most.