Here’s another Star Wars: Rebels short! This one was first published in Germany (sensing the trend?), translated and published in the UK in Star Wars Rebels Magazine #3, and should be published stateside eventually. Until then, happy Googling!

This one is a solo adventure for Kanan as he is forced down by the Empire on a strange planet. Taken in by the locals, he is taken to their lightsaber-wielding leader who, despite his weapon, is no Jedi. Of course, this is when the Inquisitor decides to show up looking for Kanan….

This one wasn’t bad. The story was predictable, but that’s par for the course on these I’m thinking. As with previous stories illustrated by Molesworth, I think his art is perfectly serviceable and possibly better than these comics could reasonably hope for. Is this one essential reading? Not really, but it was fun nevertheless. 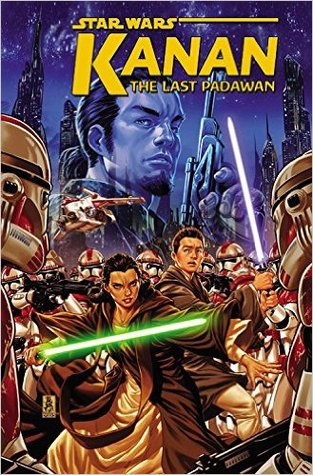 I’ve got to admit, I’m a bit behind on the Star Wars: Rebels front. Due to a marked lack of cable, I decided to wait til it hit DVD and catch up from the beginning. In the meantime, here’s the first arc of Marvel’s series filing in the backstory of Kanan Jarrus.

Before there was Kanan Jarrus, cocky and sarcastic renegade fighting the Empire at every turn, there was Caleb Dume, a young Jedi Padawan apprenticed to Jedi Councilwoman Depa Bilaba. Caleb and his master have just liberated the planet Kaller from the Separatists when Order 66 is given, triggering a pre-programmed command forcing Clone Troopers across the galaxy to turn on their Jedi leaders. Thank to his master’s sacrifice, Caleb escapes the initial slaughter only to find himself alone in a galaxy where being a Jedi is an instant death sentence…..

Even without more than a passing familiarity with the character of Kanan Jarrus, this was an incredible comic. The moment Order 66 is given Caleb’s world falls apart, and you can see the anguish and survivor’s guilt writ large across his whole existence. He is very much aware of the fact that Master Bilaba could have escaped, at least temporarily, but chose to sell her life so he could escape…and that he ran, leaving her to her fate. I very much look forward to getting to know this character better when my DVDs arrive in the mail…. It was also interesting to watch Styles & Grey come to terms with what they did during Order 66, seeing them react in different ways to the realization that they had slaughtered their beloved commander without a second thought. (Side effect: this puts paid to any Legends stories where Clones disobeyed the order, as their inhibitor chips would simply kick in the pre-loaded commands. Most Clones would never even think to question their actions after the fact.) The writing is top-notch, and the art is simply stellar. The last chapter is a Rebels-era adventure as Kanan returns to Kaller for the first time, haunted by the ghosts of the past.

CONTENT: Mild violence, including a bit of blood in a couple spots. No sexual content. No profanity that I recall; if there was any it was pretty mild.