Review: “The Rose Of The West ” by Mark Bondurant 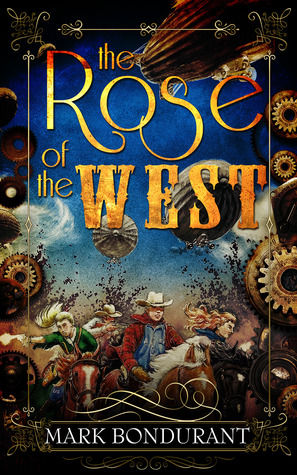 You’ve gotta love a good steampunk western, and Mark Bondurant’s debut novel certainly delivers. The pace is a bit leisurely in the first half, and a couple artifacts from previous versions of the story occasionally pop up, but on the whole I really enjoyed this one. I received my copy in exchange for an honest review through the Goodreads FirstReads program.

Deke Hayden is product of the American West, raised among the Paiutes and fighting by their side against Mexico and their allies after his parents were killed. Now he’s seventeen and on a mission to see the big cities of the East. Kay Mapleton is a girl alone in the world, her family having died off one by one. She’s not hurting for money, as her grandmother’s estate proved quite substantial, but a seventeen-year-old girl cannot live alone and living with her aunt’s family holds no appeal. Instead, she sets out west to find her father, disappeared ten years previous. It would of course be smarter for both of our young protagonists to wait for the Great War between the North and the South to end before setting out, but youth should be allowed some measure of foolishness….

Like I said, I really enjoyed the book. Steampunk is a genre I’ve not explored nearly as much as I’d like, but I’ve been a fan so far. The characters were likeable enough, and I found myself caught up in their adventures despite there being very little mystery as to how things would turn out after the spoiler-ridden introduction. The plot is leisurely, definitely more focused on the journey than the destination, but that’s okay sometimes–I certainly think the book would suffer from any attempt to shorten it or make it conform to the traditional “three act” structure. I will admit that there a few flaws, though, despite my enjoyment.

Now, I love a good alternate history–it’s one of my favorite genres, in fact–but it involves walking a tightrope between changing things enough to warrant the effort and keeping things recognizable. Additionally, you have to identify the inciting incident for the change and tell us what happened to set history onto a different path. This is one of the few places the author suffers a misstep. In the world that’s presented here, the Civil War was somehow delayed until the late 1880s/early 1890s. We aren’t told why, but its easy to rationalize that it had something to do with the increase in steam-driven technology. What’s more difficult to rationalize away is the fact that despite this delay the Presidents of the warring factions are still Abraham Lincoln and Jefferson Davis. Delaying the Civil War by almost thirty years should make both men too old to fill their historical roles when it finally goes down, or at least force some sort of change, but when he appears in the book Lincoln acts like his normal self (inasmuch as a dead historical character I’ve only read about can “act like his normal self). In my humble opinion, it would have been better to adjust the birth of steam technology backwards than to adjust the war forwards–had there been no mention of the date, that’s the assumption I would have made. The only other quibble I have is that there are a few artifacts from a previous version of the story–namely, references to the characters’ future exploits that then have no place in the future described by the coda. Details below, involving mild spoilers.* Again, a minor quibble and easy to ignore if you aren’t paying close attention, but it bugged me a bit.

CONTENT: Mild profanity, not widespread. Some strong violence and the implication of torture. No explicit sexual content, but plenty of low-detail implied sexual material including the rape and attempted murder of a character along with numerous references to prostitution and related activities.

*Specifically, there are numerous references to the “Hayden Gang,” and at one point it is stated that “It was the first flight of the Hayden Gang from the law, a foreshadow of their trials in the long years to come.” Except that the coda describes their future as legal and aboveboard mine owners, growing rich and having kids.