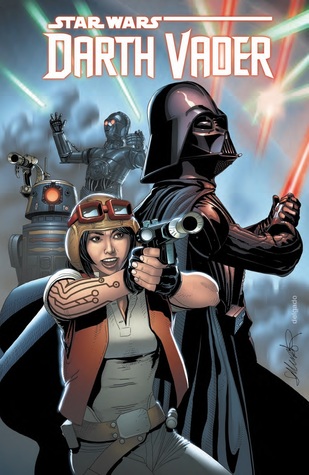 Still reeling from the revelation that the pilot who destroyed the Death Star is named Skywalker, Darth Vader redoubles his efforts to track him down off the books. For that, however, he’s going to need funds. Staging a heist is easy. Getting away with it is less so….especially when he’s partnered with a genius investigator and ordered to solve the crime at all costs! Vader is soon forced to play a deadly game, one in which his catspaw Dr. Aphra may just become a pawn to be sacrificed….

This was a lot of fun. Watching Vader scramble to work both sides of an investigation and cover his tracks was interesting, and the interlude on Tatooine was great. It makes perfect sense, of course–Vader’s just learned that the boy he’s hunting is named Skywalker and hails from Tatooine. The logical starting point is the Lars homestead. It’s not every writer/artist team that can wring emotion from Vader’s expressionless mask, but Gillen and Larocca manage it brilliantly. Unlike the first volume, this one has no tie-in with the corresponding arc of the main Star Wars series. They still happen more or less simultaneously, but separately. That will change again next time, and I look forward with great anticipation to the upcoming crossover event: Vader Down….

Everyone loves a good villain, and few capture the imagination like the hulking ebony figure of Darth Vader. It is then appropriate that Marvel’s main Star Wars line is accompanied by another ongoing series focused on our favorite fallen Jedi….

Spinning out of the main Star Wars book, Kieron Gillen paints us the picture of a Sith Lord on the ropes. In the wake of Vader’s failures at the Death Star and Cymoon I the Emperor has placed his erstwhile apprentice several rungs further down the chain of command than he is used to standing, forcing him to take orders from those he sees as inferior and not even bothering to hide the fact that he is keeping secrets. Vader’s going to have to outmaneuver all the rivals clamoring to fill the power vacuum left by his fall and find a way to work his way back into his master’s favor, or else face being replaced….

As with the main Star Wars series from Marvel, I really enjoyed this. From the propaganda-laden opening crawl to Vader’s final understanding of his relationship with the Emperor, every bit of the story gelled. The writing was superb, and it’s always fascinating to peel back Vader’s helmet and get a peek into the thoughts of one of the more complex characters populating the Galaxy Far, Far Away. At the start of this book, Vader seems to have lost sight of how the Sith operate, following Palpatine with complete loyalty and trusting that the Emperor is likewise loyal. The six issues here will drive home how mistaken he is, and it is one heck of a ride. The side characters introduced here were fun, even if they were a bit derivative. I mean, murderous C-3PO! How can that not be fun? The art was always stellar, though there were a couple panels in certain action sequences that failed to convey the appropriate sense of movement and energy. I enjoyed how tightly this book tied in with the main Star Wars title, but some people may grow annoyed with everything happening off screen. Just read both and you’ll be fine! (In case you were wondering, the proper order is Star Wars #1-3, Darth Vader #1, Star Wars #4, Darth Vader #2-4, and then #5-6 of both series happen simultaneously, both culminating in the same scene from slightly different perspectives.)