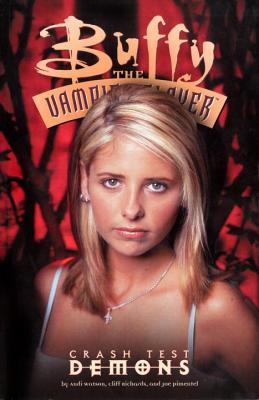 The Buffy binge continues! This time we have the next three issues in the ongoing arc begun back in Bad Blood. Crash Test Demons collects issues #13-15 of the ongoing Dark Horse series, which can also be found in the Buffy The Vampire Slayer Omnibus Volume IV.

We start out on a weird note in Love Sick Blues, with Cordelia deciding her image needs revamped and deciding to compete with Willow in the school’s “Quiz Bowl.” Yeah, you heard that right. Of course, to have a hope of succeeding Cordy’s going to need some supernatural help, and that comes with consequences….In the untitled following issue, things start to get serious as Buffy and Angel encounter several “super-vamps” that take a lot more killing than usual. Oh, and after Buffy saves his bacon, Todd (the creep from A Boy Named Sue) develops an unhealthy fascination with our favorite Slayer….Finally, Lost Highway sees Buffy attacked by a trio of super-vamps after a fortuitous (under the circumstances) hit-and-run. All the while, Selke and her pet doctor are trying to raise a new dark power in Sunnydale….

Meh. The art was great, with the briefly-confusing exception of a few moments where the super-vamp gang contains a member who looks just like Buffy. The writing though….not so great this time through. The first story was mostly okay, but the other two are plagued with unresolved subplots, like Spike & Dru showing up just long enough to work some mischief and (apparently, since they don’t appear again) disappear without so much as a how-you-do. The characters’ dialogue was all spot-on, but the plotting and pacing could use some work. I think they just tried to stretch this ongoing story a little too long, causing issues here in the middle of the tale. Timeline-wise, for lack of any other information this continues to follow the previous so many stories, in the slot between Buffy S03E10: Amends and Buffy S03E11: Gingerbread.

CONTENT: No profanity that I can recall. Vampire violence consistent with the Buffy television show. Some mild sexual innuendo…. Buffyverse vampires could be considered occultic due to their demonic nature, but it didn’t bug me.