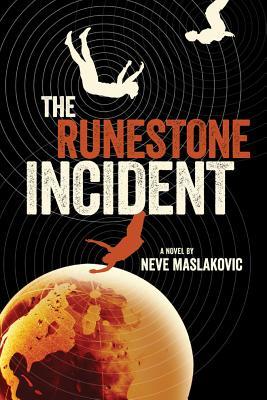 If you’ll remember, last month I read and reviewed Neve Maslakovic’s The Far Time Incident in an attempt to get my money’s worth out of my Amazon Prime subscription. Fortunately, the second book in the series is likewise available to borrow, and so now I give you a review of The Runestone Incident. Obviously, there will be spoilers for the previous book. Nature of a series and all that. You’ve been warned.

“We…found ten men, red from blood and dead. Ave Maria save from evil.” Unlike Pompeii, I actually had no prior knowledge of the Kensington Runestone. I was most of the way through the book before it even occurred to me that the artifact in question (and thus the debate being explored) really existed. It does, and you can read about it on Wikipedia here. It’s an interesting debate, but since we unfortunately don’t have access to a real-life time machine, one that will likely never be satisfactorily solved.

St. Sunniva University was just getting back to normal, and then this. Last year there was the thing with the missing professor, and the attempted murder-by-time-machine, followed by the shock of the travelers’ return and the revelation that the supposed-culprit was framed. Julia Olsen and her companions returned safely, but they managed to keep one relevant fact out of the news stories that followed–they accidentally brought a young Pompeiian girl home with them when they returned. Now Julia’s not-quite-ex-husband (the divorce papers, like the proverbial check, is “in the mail”) has shown up in town threatening to expose their secret if he’s not allowed the use of the time machine to prove the authenticity of the Kensington Runestone, which his grandfather supposedly helped discover. Being a stubborn sort, he refuses to take no for an answer, and soon disappears into the past with Dr. Holm, who is herself fixated on finding the fabled Vinland. Is Holm a hostage or a fellow conspirator? Julia doesn’t know, but they can’t take any chances….they’re going to have to follow the pair into pre-Columbian America and hope for the best….

As with the previous volume, the author really did a great job with her research. Just as important, she manages to communicate the relevant factual information to the reader in a way that avoids at least the worst brand of info-dumping (i.e. Character 1 telling his friend, “As you know, Ourland has been at war with Daenemy for over a century….”). Most of the relevant information is being learned for the first time by the primary characters, and believably so. Do the secondary characters lecture? Sure, some, but the lectures are required not only by the reader but also by the characters. Anyway, I wasn’t bugged by it. You might be. The story was fun, and I enjoyed it immensely, but I wouldn’t say it’s incredibly thrilling. The stakes just aren’t all that high. Quinn is going to reveal their secret? Oh darn, the media will pester them. So horrifying! Quinn and Holm have disappeared into the past? We don’t really like Quinn, so if he comes to harm it’s little loss to us. We like Holm somewhat, but Julia (our POV character, and thus our filter for all information) doesn’t trust her completely, nor does she believe Quinn is capable of kidnapping and/or murder, so there’s not really the highest of stakes there either. Of course, she could be wrong, and like I said I was interested all the way through, but it’s not life-or-death for the most part. The most dangerous factor is actually History itself trying to keep them from changing anything. The historical question? Well, I am interested, but a novel is hardly going to actually solve a real-world mystery. Whether the Runestone is real or fake at the end of the book, it’s still a mystery here in the real world. For those of you who complained about the obvious “sequel-bait” ending to the first novel, be forewarned that Ms. Maslakovic has done it again here, but don’t expect me to share your annoyance. It just doesn’t bug me. Some of my favorite authors do that. Jim Butcher put a bullet in his main character’s brain and left him sinking unconscious into the depths of Lake Michigan, for Heaven’s sake! My only reaction to that was to bite my nails until the next book came out….

You know how Amazon advertises their Kindle Owners Lending Library as one of the benefits of having a Prime account? Well, I forgot to cancel my free trial in time (“30 Day” is apparently not the same thing as “1 Month”) and so I’m stuck with a $100 membership for the year. Wouldn’t hurt the pocketbook so much if it wasn’t a lump sum….anyway, I figured I should try and get my money’s worth out of it, so I pulled up my truly massive TBR list and started searching Amazon’s KOLL. It took me fifteen minutes of searching before I found one on my list that was available to borrow, but I have to say that I truly enjoyed this book. I first heard of this book when I entered a giveaway over on Goodreads. I didn’t win, but a year or so later I’ve finally got around to reading it anyway.

Julia Olsen’s week just got harder. The tiny campus of St. Sunniva University is thrown into an uproar when the Time Travel Engineering department’s senior scientist, Xavier Mooney, is seemingly lost to one of History’s ghost zones, and as assistant to the Dean of Science, it falls to Julia to deal with a good deal of the fallout. It seems Mooney stepped into the department’s time machine, STEWie, for an unauthorized late-night run, and never returned. His modern clothes and effects were left behind, everything in order and as normal, he simply failed to return with STEWie’s “basket.” When the subsequent investigation points to foul play, the security chief insists on taking a short trip himself to see how a “normal” run goes. Julia, a Shakespearean scholar, and a couple grad students all tag along. Their intended destination is JFK airport, to see the Beatles arrive on US soil. Instead, they find themselves on the slopes of Vesuvius the day it’s traditionally expected to erupt….

Like I said, I thought this was incredibly fun. The early parts of the book are chock-full of academic politics as Julia tries to keep things running in the wake of the tragedy, and it was fun to revisit that world for a while even if I was never a part of that side of it. Once in the past, I also really enjoyed the depth of research into Pompeian culture. I’ve never been there myself, but everything my wife told me about her visit jived with what I read here–right down to the overabundance of phallic symbolism. Like I said, I enjoyed these elements. Other readers/reviewers have found the book a bit slow. Another minor issue: most of the mysteries here were decently easy to figure out. The central mystery remains mysterious until the reveal, but I called that they were in Pompeii way before they figured it out,* and also figured out who trashed Secundus’ garum shop way in advance. This didn’t really detract from my enjoyment, but I know some people are finicky about that stuff. I look forward to reading the sequel soon, as it is also available via the KOLL.

CONTENT: I don’t recall any R-rated language, but there may have been a little. Mild profanity otherwise. Mild violence. Some sexual innuendo, but nothing explicit. No occult content aside from Romans praying to their gods, as you would expect in 79 A.D. Pompeii.

*This may have been residual knowledge from having read the book’s blurb last year, though, or the fact that I watched the movie Pompeii last week. This is so easy to figure out (and revealed in the book’s synopsis to boot) that I don’t feel bad spoiling that particular non-surprise.