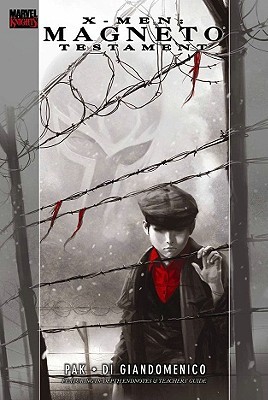 “So to save everyone, I did nothing. And guess what? They killed them all anyway….” (Max, issue #5)

Whoah. I mean….whoah. Magneto has always been one of the most interesting characters in the Marvel Universe, a nominal villain who seems to fight for the side of the angels almost as frequently as he opposes them. There are all kinds of Marvel villains who are irredeemable psychopaths (Carnage, Mr. Sinister, Apocalypse, the Purple Man, the list is endless), but Magneto is a different breed entirely, the most dangerous kind of villain possible: Magneto believes he is doing the right thing. His methods may be occasionally merciless, but Magneto is  a man who has lived through genocide once before and sworn to never again let that happen to his people. He could not save the countless Jews who went to the gas chambers under the guns of their Nazi overlords, but he’ll be damned if he sees the same thing happen to his new brothers, mutantkind. Given the human response to fear that which is different, and destroy what we fear, Magneto has come to the harsh conclusion that the only way to safeguard his people is to install a new world order ruled by mutants. To that end, he has at times served both as hero and villain. He’s a conflicted character, forged by tragedy. And now, with Magneto: Testament, we’re given the definitive story of his beginnings, from 1935 Nuremberg to the horrors of Auschwitz….and all with an eye to absolute historical accuracy.

In 1935, Max Eisenhardt was a simple German schoolboy. Top of his class, excellent athlete, he’s even managed to catch the eye of a pretty girl. Unfortunately, Max just happened to be Jewish, and Magda just happens to be Romany. Neither ethnicity is going to be able to weather the storm ahead, when the Nazi regime unleashes their Final Solution and institutes the most comprehensive and systematic genocide program the world has ever seen. From the Nuremberg Laws to Kristallnacht, Berlin to the Warsaw Ghettos and on to death camp of Auschwitz, young Max Eisenhardt serves to give us a new lens into this horrific period of human history….and a new insight into one of the most fascinating comic characters I’ve had the pleasure of reading.

This should go without saying, but this is not a happy book. An important book, one that punches you right in the gut and takes an unflinching (yet respectful) look at the deepest darkness of the human heart, but not one for young children. That said, this book could provide a very compelling supplement to a high school study of the Holocaust–it’s painstakingly accurate, annotated every step of the way with endnotes containing citations for facts and elements that are incorporated into the story, and even contains a teachers guide with suggested activities. I fully intend to add it to my own personal collection at some point when I have the funds. The book is compelling, well-written, and brilliantly haunting, yet at the same time treats the real, historical people who suffered in this most horrific of periods with the utmost respect. For example, the Nazi practice of tattooing the prisoners with their identification number. Showing that number on Max’s arm would be unremarkable, aside from clearing up some of the more geeky arguments about Marvel canon since there have been several different numbers used in different stories over the years. Yet the writer refrained. “We made the decision not to show Max’s actual number in this tattooing scene. The more I read the testimonies of actual survivors, the more uncomfortable I became with the notion of giving our fictional hero a number that a real human being once bore.” (Greg Pak’s endnotes to issue #4) The creators here don’t shy away from the horror of the Holocaust, even dealing with it more in-depth than some other sources due to Max’s status as one of the Sonderkommando prisoners who had to process the bodies from the gas chamber to the crematorium, but neither do they play it for shock value. Every effort is made to preserve the humanity and dignity of the real humans who suffered and died all those years ago. I respect that.

CONTENT: Minor language. No real sexual content, though there is some low-detail nudity as prisoners are stripped for the gas chambers and Max’s uncle (implied to be a bit of a hedonist) is paraded through the streets with a sign that says “I have shamed a German woman.” The violence here is occasionally bloody, but usually restrained in its visual representation. That doesn’t make it any less disturbing as characters are murdered, groups of prisoners gassed, and their bodies piled up or incinerated. Like I said, though I recommend this book wholeheartedly, this is not for young children.