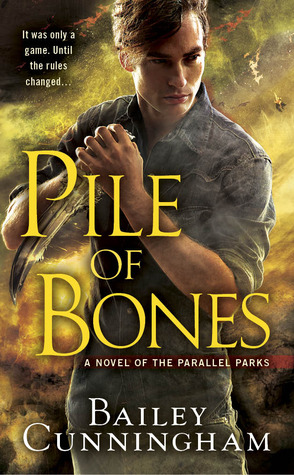 Every sci-fi/fantasy novel has a learning curve. This one? This one’s got a corkscrew.

Oh, and I got this book in exchange for an honest review through the Goodreads FirstReads program. This in no way influenced this review, except to ensure it exists as I likely would never have read it otherwise.

By day they’re a group of grad students, toiling away at never-ending stacks of grading (or “marking” as the Canadians apparently call it) and trying to figure out just what they were thinking when they decided to join academia. But by night…by night they are whisked away to another world entirely, living out very different lives as characters in the pseudo-Roman city of Anfractus. In our world, Andrew is a slightly introverted scholar of Old English epic poetry. In the other, he is Roldan, a majorly introverted would-be auditor, able to hear and speak to the lares that share Anfractus with its human visitors. In our world, Carl is an overly-confident historian studying Byzantine buttons. In the other, he is Babieca, an overly-confident would-be trovador skilled both at music and theft. In our world, Shelby is a slightly awkward scholar of Restoration literature that has been studied until there’s nearly nothing new left to learn. In the other, she is Morgan, a no-nonsense sagittarius, one of the bow-wielding guardians of Anfractus and the de facto leader of the company. In our world, Ingrid is a single mother studying elementary education. In the other, she’s Fel, a sword-wielding gladiator and one of the many keepers of the peace in Anfractus. It’s all fun and games, until our protagonists find themselves embroiled in an assassination plot that threatens to upset the balance of power both in Anfractus and back in our world….

The idea behind this series is brilliant, and the world created therein is fascinating. The character you assume in the other world is very real, complete with a backstory and distantly-glimpsed memories of a time before you played them, and while there are often a number of striking similarities there can also be drastic differences as well. You might find yourself back in our world marveling at the behavior of your other self, wondering why in the world you said or did something on the other side. One of the more amusing scenes was the moment our characters returned from Anfractus, only to suddenly remember at the same moment that they’d hooked up on the other side. Anfractus may seem like fun and games, a live-action version of Dungeons & Dragons, but it can be deadly as well. Injuries sustained there will follow you home, as will the grudges of those you’ve crossed. If you’re not careful, you can wind up very much dead in both worlds.

Like I said, the concept is fascinating. The execution…can be incredibly frustrating. Anfractus comes with its own extensive vocabulary that is never clearly defined, forcing you to figure things out by context clues. That technique is all well and good here and there, but when employed on this scale it can be just confusing. You even have to figure out that Andrew and Roldan are the same person (kind of) in different worlds and how that works. I actually set this aside for a few weeks after about a hundred pages (things with deadlines take priority) then started the book over from the beginning when I came back to it, and that did help a bit. I enjoyed the first part a lot more when I was able to figure out what was going on. A glossary would have been helpful. For all that, though, I have to admit that I did enjoy the book. The characters were engaging, as nerdy or more than I am myself, and despite what I expected most of the way through, I think I actually will end up trying to get my hands on the other books in the series….so long as I can get them from the library.