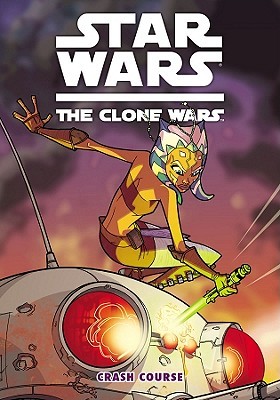 As previously mentioned, I’ve been revisiting the early Clone Wars stuff in an attempt to work out a coherent timeline. So, without further ado, here’s the second Clone Wars digest comic!

After a series of failed offensives, the Jedi surmise that a Separatist spy ring is operating on Coruscant, feeding the enemy classified information. When a Separatist agent escapes with important data, Anakin and Ahsoka go undercover in the world of high-stakes podracing to catch the culprits. But even if the spies never realize they’ve been made, podracing is one of the deadliest sports in the galaxy….

Again, this was a fun little side adventure. Though I’m not a huge fan of the Fillbach Brothers’ art, it’s serviceable enough to get by. The story itself worked well, with the characters all ringing true to their TV personas. It was also fun to stick Anakin back into the world of podracing and see him confront his childhood once more. It’s also interesting to see Ahsoka accumulating her own small network of contacts that will serve her well after she leaves the order. As with the previous comic, whether you’re a fan of this story or not will likely depend on your familiarity with the show.