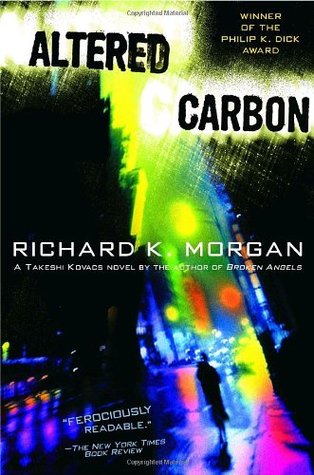 This is probably the most interesting idea for a science fiction story that I’ve encountered in quite a while, and if you can handle all the grimy, squalid detail of this cyberpunk masterpiece, I heartily recommend it. On the other hand, this is pretty solidly in the noir category, so if the staples of that genre are going to put you off, maybe give this one a miss. And yes, I did go find a copy of this as a result of seeing trailers for the Netflix series. I’d never heard of it before! Not sure how that happened, but I’ve rectified it now.

By the twenty-fifth century, mankind has conquered death. Everyone on Earth is implanted with a cortical stack, a small disk at the base of your skull that stores everything that makes you…well, you. Your memories. Your consciousness. You. You die, they download your stack and stick you in a new “sleeve” or body…if you can afford it. Most can, at least once, but aging takes a toll. At the end of the day, most people refrain from more than a couple lifetimes. There are, of course, exceptions. The truly rich can afford to clone themselves and keep a small stock on hand for emergencies, complete with a period off-site stack backup in case of catastrophe. These fortunate few are referred to as Methuselahs or “Meths” by the masses, after the biblical figure who lived nine hundred and sixty-nine years, and most view them as slightly inhuman. To be sure, watching a few centuries of history march by does give most of them a slightly different take on the world and society – they tend to disregard the “little people” even more than the rich and powerful here in the twenty-first.  Of course, this societal revolution has impacted literally every element of the world. Travel? Beam yourself across the stars instantly and have them sleeve you in a new body halfway across the galaxy. Or across the globe, if you’re really impatient. Prison? Nope. Criminals are simply stuck on the shelf for the length of their sentence, their bodies sold off as bargain sleeves unless a loved one can pay to keep it mortgaged. Your sentence is over, you get resleeved into whatever is available. You went in as a twenty-year-old black man? You might come out a middle-aged white guy, or vice versa. Murder isn’t as much a thing, since “you” are your stack, not your body, and thus far more durable. Cases of “real death” do occur, but mostly it’s “organic damage” and the victim can be resleeved in time to testify about their own attempted murder.

This is the world of Takeshi Kovacs. Once a crack UN Envoy, specially trained to be sent all over human space to fight minor wars, now Kovacs is a mercenary and a criminal for hire on the fringes of the Protectorate. After dying in a hail of gunfire on Harlan’s World, Kovacs understandably expects to be on ice for a century or two. Instead, he finds himself resleeved on Earth. It seems a Meth, Laurens Bancroft, blew his own brains out a couple weeks ago…or at least that’s what the police report says. Bancroft, now in a new sleeve, doesn’t believe it. He doesn’t remember the night in question, but he’s pretty sure he wouldn’t try to kill himself, and if he did want to kill himself, he’d have done it right so he couldn’t be resleeved. If Kovacs manages to figure out who actually had Bancroft killed, he’s a free man in a designer sleeve on whatever world in the Protectorate he desires. If he fails…well, that’s not a good idea. Kovacs might be inclined to take the police at their word – every single piece of evidence points to Bancroft vaporizing his own head – if not for their stubborn resentment of his presence. Not to mention the hitman who knows his name and (new) face on a world he’s never visited in his life. Someone doesn’t want Kovacs to find out the truth, which means that there’s truth to find. Tipping him off to that fact was their first mistake. Pissing him off was their second. They may not get a third….

As I said before, this book was superbly executed. The worldbuilding is spot-on, and I can’t think of a single arena where Morgan didn’t think through the implications of the tech he was unleashing on his fictional world. There are throwaway lines left and right that hint at a larger world and history at play here, and I want to explore them all! I wasn’t a huge fan of the religious subtext, though. Morgan is pretty anti-religion here, especially Catholicism. The Catholic church has decided that your soul cannot be separated from your body, and so resleeving yourself is forbidden. And since there’s no special provision for an alternative punishment, Catholics that are sentenced to any time in storage – even a week – are as good as dead. Reasonable bit of extrapolation there, given real-world trends in Catholic doctrine, but Morgan (through Kovacs) is really vitriolic on the subject. It’s also a huge plot point, as Catholics make perfect targets – they can’t be resleeved to testify at trial, so you’re likely to get away with whatever crime you commit against them. Thus, there are several brothels that unofficially only hire Catholic girls in case they have to make them disappear. (No word on how prostitution can be made to square with their beliefs.) Protestants aren’t mentioned, though I think that debate within my branch of the church would grow rather heated as well. Muslims don’t come off well either, especially in Kovacs’ flashbacks to the fighting on an Islamic world, Sharya.

CONTENT: Strong R-rated profanity throughout. Graphic violence, including virtual torture where a character is downloaded into a mainframe, in a simulated female sleeve, and repeatedly raped, beaten, and mutilated to death, only to have the system reset. This isn’t described in great detail, but is pretty disturbing nevertheless. Graphic sexual content, including the torture scene described above. Some pretty heavy drug and alcohol use – fictional drugs, not describing the effects of anything that actually exists (to my knowledge), but still. Bottom line: not for kids or the faint of heart.