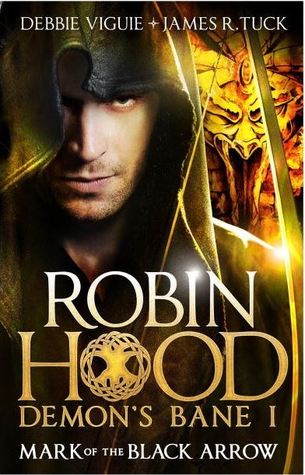 Dark days have come to Sherwood. King Richard has sailed for the Holy Land to do battle with the forces of darkness, taking with him the best of England’s strength. In his absence, darkness has taken root across the land aided by the would-be king John and his right-hand, the demonic Sheriff of Nottingham. Those loyal to Richard and the forces of light face an uphill battle as they try and protect the innocent from the heavy hand of the usurper. A man can be killed for standing against the king, but a legend? A legend can inspire hope even in the darkest of times. It is time for the Hood to once more protect the people of England….

Just when you thought you’d seen every incarnation of the Robin Hood tales imaginable, Debbie Viguie and James Tuck pull this out of the hat. This time around John is no petty tyrant, concerned only with how much gold he can ring from the people and aided by cruelly efficient human agents. This time John is a servant to the forces of darkness, determined to break the spirit of the people and deliver all the world to darkness. Unless, of course, our heroes can stop him….Enter Robin Longstride, youngest son of Richard’s right hand. He’s more at home hunting in the forest than trying to fill his father’s shoes, but with the elder Longstride off to the Holy Land Robin hasn’t much choice. The only bright spot in being called to the castle is the chance to see the king’s niece, Maid Marian. The king’s ward since the death of her parents in a tragic fire, Marian was supposed to serve as an adviser to John in Richard’s absence. John…has a different idea. Robin’s cousin, Will Scarlet, is far more comfortable at court than in the woods, but his task is far more dangerous–to stay in the usurper prince’s confidence, saying nothing while horrors are perpetrated before his eyes. The book walks a bit of a tightrope between dismissing and wholly embracing the power of the Church, but I think that is appropriate for the time in which it is set. There were undoubtedly good monks and church leaders, like Friar Tuck and the Cardinal, but there were also brigands hiding in their ranks. Then too, it is politically incorrect (not to mention historically inaccurate) to cast the Crusades as a struggle between Good and Evil. Not that this book is all that concerned with historical accuracy–it is far more concerned with staying true to the traditional narrative, which is deeply flawed in historical terms. King Richard spent little time in England at any time during his reign, and certainly little resembled his benevolent character from most Robin Hood tales. John did die in Nottinghamshire, but it wasn’t his headquarters. He was just passing through when he took ill. I’m not saying this is necessarily a weakness to the book, or even that I’d take it a different direction if I wielded the pen, just that like most Robin Hood legend it smacks far more of fiction than it does history. It was an unusual tale, but very fun. I look forward to the publication of the rest of the trilogy with great anticipation.