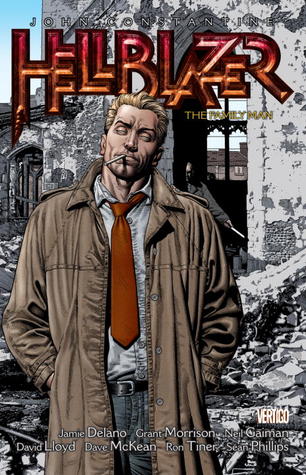 This volume of the ongoing Hellblazer comic series proved to be a mixed bag, not in terms of quality but in terms of subject matter. Much like the first volume, but in this case it was all tied together by a larger narrative. It was, I think, my favorite volume so far….which is a bit chilling, since this was undoubtedly the most messed up volume yet as well. At any rate, I’m finally seeing what everyone raves about with this series.

John Constantine knows how to handle a supernatural threat. Usually, that’s run like hell, but still. He faces down the things that go bump in the night on a regular basis, has stared into Hell and had Hell stare back. He bears the scars of these encounters, both physical and mental. But now? Now Constantine is up against his most unnerving enemy yet–a strictly vanilla human serial killer who specializes in slaughtering entire families. Fresh from the near-apocalypse caused by the government’s runaway “fear machine,” and needing a place to lay low, Constantine drops in on an old friend and finds himself in the middle of a mind-bending meta-fictional romp. A few weeks later, a mysterious figure shows up at the door in search of Constantine’s missing friend. This encounter will plunge Constantine into a deadly game of chess for his very soul…. In between the moves of that deadly game, we get some guest appearances. First off, Grant Morrison and David Lloyd spin a tale of nuclear horror as a town and the new missile base just up the road both fall victim to a sinister experiment. Then Neil Gaiman and Dave McKean take an issue to explore the human need for affection and just simply being noticed. Later, Dick Foreman spins a yarn about a madman’s dream to take over the world using an unlikely vehicle for his ambitions.

Like I said, this volume mostly holds together pretty well. We segue in from the previous volume, then move on to set up the chance meeting between Constantine and the Family Man. From there, Constantine tries to ignore the fact that he alone knows the killer’s identity, having a couple side adventures that allow for some guest teams and (I presume) Delano to catch up his schedule before the main showdown and cleanup. It meanders a bit at the end, perhaps, but that mostly serves to allow the next volume to start on cue instead of rambling about first. I’m fine with that. Random Neil Gaiman appearances are always appreciated, and Dave McKean’s style complemented the story being told quite well. I wasn’t quite as fond of the Morrison/Lloyd tale, but that may have been a byproduct of its very obvious political leanings, and I found the Dick Foreman story pretty forgettable, possibly because the art rubbed me the wrong way. At any rate, I’m sticking with the series for a while longer. I see we change lead writers for the next volume, so that will be interesting….

CONTENT: Some strong language, PG-13 grade. Some semi-explicit sexual content, including implied molestation, incest and rape as a city gives in to all of its suppressed desires. Strong violence, very gory in a couple places. Very little occult content this volume though, considering the series as a whole.