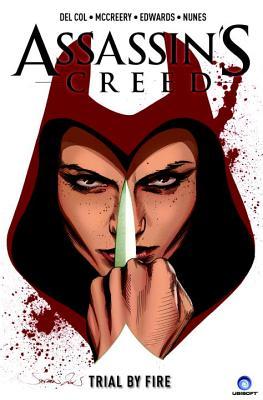 The Assassin’s Creed franchise chronicles the never-ending struggle between the power-hungry Order in all its forms, from the Templars to the mega-corporation Abstergo, and their sworn enemies the Brotherhood of Assassins. The games have allowed players to explore such rich environs as Renaissance Italy, France and America during their respective Revolutions, even the Holy Land during the Crusades. Now the first volume of Titan Comics’ new ongoing series adds a new setting: Salem, Massachusetts, during that village’s infamous witch scare.

Charlotte De La Cruz is living the dream—a useless degree and a dead-end job as a teller for the same bank that holds her mountain of student debt. Her only escape is playing Abstergo’s popular VR game Helix, which allows players to reenact the “fictional” battles between the heroic Templars and the dastardly Assassins…until that battle finds its way into her apartment. Before she can blink, Charlotte finds herself living the adventures of her ancestor Tom Stoddard in a quest for a powerful relic, racing to warn her new friends before they unwittingly walk into a deadly trap.

I enjoyed this, personally, but as a reviewer I have a couple caveats. On the one hand, this was definitely an interesting story and a valuable addition to the Assassin’s Creed mythos. If you’re a fan, you’ll enjoy this. On the other hand, if you are unfamiliar with the franchise you may find yourself lost. Also, this is just the first act of a larger story, not a standalone tale. The ending is less ending and more transition to the next chapter. The writing and art were solid, while the history showed the Assassin’s Creed team’s usual levels of both research and editing. Bottom line: if you enjoyed the adventures of Altair and Ezio* you’ll enjoy this.

*I’m still all the way back in Assassin’s Creed II, so I’m not too solid on the later characters.