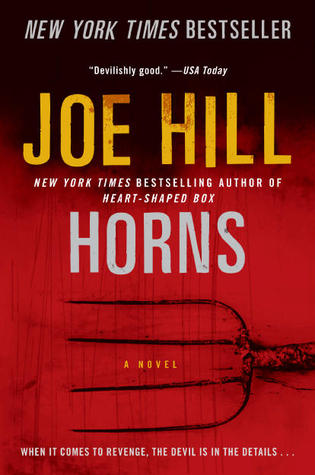 I’d been meaning to read some of Joe Hill’s work for a while, and just hadn’t got around to it yet. Then they announced that Horns was going to become a movie, and so of course I had to read it. Can’t commit heresy by seeing something without reading the book first, right? (I still haven’t seen it, but they’ve got my name on the list at the library for when it comes in.) In case you don’t know, Mr. Hill is the son of horror fiction’s crown prince, Stephen King, and has taken to his father’s craft with a vengeance. I’m not kidding when I say that every single book he’s produced has been recommended to me by one person or another, usually multiple times. I’ve mentioned before that in my limited reading of King I tend to not be particularly fond of the protagonist for one reason or another (there are exceptions, of course.) That’s not a problem Hill has, at least not here. The project here is ambitious–I half-imagine someone bet Hill that he couldn’t write a story with the devil (or more accurately, a devil) as the protagonist and make him sympathetic. Well, if that’s the case, Hill won the bet.

Until a year ago, Ignatius “Ig” Perrish was a saint. No, that’s not quite right–saints don’t typically smoke, drink, or spend the night with a girl they’ve not yet married (even if there’s no doubt in anyone’s mind that such an event is in their future.) Ig does all of these things on a regular basis. So, a sinner, but a good-natured one. All that changed the night his girlfriend, Merrin Williams, was raped and murdered in the woods. Ig was the only real suspect, as she had just broken up with him in a very public drunken shouting match at a local restaurant, but the case went cold for lack of evidence. Ig never got his day in court, and so never had a chance to prove that he didn’t do it. Even if he had, it may not have convinced anyone. Ig spent the next year a bitter, drunken wreck of a man. On the one-year anniversary of the murder, he spent the night drunk and doing terrible things. The next morning, he woke with horns growing from his temples–not that anyone else can seem to see, but they’re there. Also, people seem to be confessing their deepest, darkest desires to him, almost seeking permission to fulfill them. Skin contact reveals their most hidden secret sins they’ve committed in the past. Ig has no idea where this diabolical power has come from, but he knows what he’s going to do with it: find whoever killed the woman he loves, and give them Hell….

Like I said, a very ambitious book. The premise alone was intriguing, but the execution was simply masterful. I wholeheartedly recommend the book to anyone with a fondness for the horror genre, or that likes a story that’s just a little bit off the wall. I will warn you though, the book can be incredibly disturbing at times. There’s a whole section of the book told from the perspective of the killer, including the night of the rape and murder of Merrin Williams. The night I hit that section I stayed up reading long past when I had planned to stop, simply so that I didn’t have to go to bed still in his head and could reach the (comparatively) wholesome POV of Ig once again before drifting off to sleep. I didn’t want spending the night in my subconscious. The whole story is told somewhat out of order, starting the morning Ig wakes up with horns and then spending large chunks of time filling in the background through flashbacks as different revelations are made and need context or someone inadvisedly touches Ig and reveals their darkest secrets.

There are all sorts of issues with the book theologically-speaking, of course, but that’s not the point of the book and so I really won’t get into that here. Christianity, the church, and the Judeo-Christian God don’t come off well in the book, but that’s to be expected from a character who feels so betrayed and embittered towards Heaven. And really, given the treatment Hill’s father gives similar themes on a repeated basis, are you really all that surprised? I more or less expected something along those lines.

CONTENT: R-rated profanity throughout. Some gruesome and disturbing violence, including a rape and subsequent murder. Some explicit sexual content, including but not limited to the aforementioned rape (though this scene is played for horror, not titillation). The main character is becoming something along the lines of the traditional Judeo-Christian devil, including an array of diabolical powers. I think that probably counts as occult content. 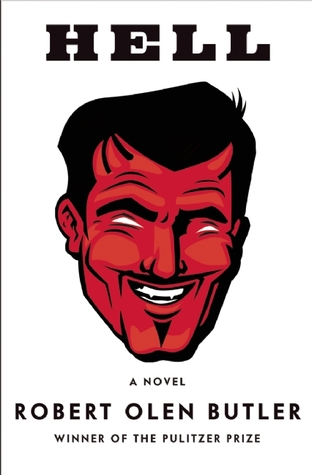 First off, thanks to the good people at ARCycling and to Mariela O. for getting me this book. Free books are always a cause for thanks, regardless of what I end up thinking of the book itself. In this case….well, my reaction was just incredibly ambivalent. Robert Olen Butler is apparently a Pulitzer-Prize winning author, but at least in this case I didn’t see what all the fuss was about. There are a few laughs throughout this work of satire, but on the whole its cynical view of human nature just depressed me. In fact, the back text “Tweets from Hell” which appeared nowhere in the actual novel was the funniest part, I thought.

Who’s in Hell? It seems like pretty darn near everyone, from Bill Clinton to Mother Theresa, and everyone wants to know why they ended up there. Hatcher McCord, as Satan’s top newscaster, has the job of interviewing all these wonderful folks and asking them that one simple question: “Why are you here?” But even though he works directly for the devil, Hell is no picnic–there’s the occasional rain of sulfuric acid to deal with, for example, or the unpredictable day/night cycle. There’s the couple living next door, eternally confined to their La-Z-Boys and bickering at each other loudly when anyone walks by. The one bright spot in McCord’s dismal reality is his girlfriend, Anne Boleyn, and even there everything is far from rosy. She’s fixated on her ex-husband, Henry VIII, for one thing. For another, it seems physically impossible to have satisfying sex in Hell….though that doesn’t stop anybody from trying. What is Hell like? Oddly enough, it’s a lot like everyday life, just without the good bits and with a lot more chaos and a higher temperature. Apparently Dante took quite a few dramatic liberties after his escape. You spend your time doing things much like you did in life, only without the hope of things turning out alright. J. Edgar Hoover runs the Devil’s surveillance service. Humphrey Bogart spends most of his time in the guise of one or another of his characters, always looking for Lauren Bacall. McCord gets to give the evening news, but the teleprompter is always trying to trip him up. One day, however, everything changes. McCord discovers that his private thoughts are his own and not, as everyone assumes, being monitored by the Diabolical One. Furthermore, there may be a way out of Hell….if only he can find it.

My reaction? Decidedly “meh,” unfortunately. I had high hopes for the comedy value here, apparently too high as it turned out. There were some laughs, sure, but quite a few of them were uncomfortable ones. I wasn’t bothered by the horrid theology–that was expected. What bothered me far more was the cynicism inherent in the tale. Heaven turns out to be a place of contented numbness, much like any anti-depressant based dystopia. The way out of Hell appears to be simply the act of trying to escape. And it doesn’t seem that anyone, not one person, made the cut and escaped being consigned to Hell’s flames. There are digs handed out at public figures left and right, historical and contemporary, significant and not so much. Those, at times, were humorous. Not enough so to salvage this book for me, but at least a little bit. I got the impression the author had some grand truth (or at least some grand assertion) that he wanted to reveal about human nature, but never quite got the curtain to come unhooked.

CONTENT: R-rated language. Explicit sexual content, typically strange and grotesque enough not to be arousing. Strong violence. Occult content….well, the majority of the book is literally set in Hell, so….