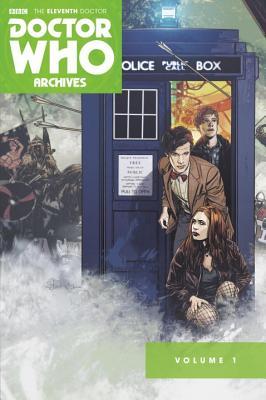 How do you explain Doctor Who? The Doctor is an alien who looks human (“No, you look Timelord!”), the last of his kind, travelling all of time and space in a vessel camouflaged to look like a 1960s British police telephone box. There’s a fair bit of tourism, to be sure, but the Doctor is always willing to help someone in need…and since his ship has a habit of depositing him when and where he’s needed rather than where he wants to be, he has ample opportunity. When critically injured he regenerates into a new body, thus allowing the showrunners to do a semi-reboot every few years without actually hitting the reset button and starting from scratch. Clear as mud? Good! Let’s move on to the book, shall we? This particular tome is a collection of Doctor Who tie-in comics starring the Eleventh Doctor (Matt Smith) and his companions Amy and Rory Pond, set during Amy and Rory’s honeymoon in between the fifth and sixth seasons of the revived series. It’s status as canon is questionable, but even with the occasional inconsistency* it shouldn’t be too hard to square things given the shifting nature of the timeline.

Doctor Who is at its most fun when it’s reveling in its core of whimsical lunacy, but there’s a deep vein of tragedy and determination to the character of the Doctor, and it’s the moments that this is revealed that make the franchise one of my favorites. Thankfully, this collection does both elements extremely well. There’s whimsy galore, from spam email infecting the TARDIS’ mainframe and manifesting as holograms to Kevin, a robotic tyrannosaur that briefly joins the adventuring. There’s a story that functions on one level as a standard Doctor Who romp and on another as an homage to the show Castle, transplanting the cast of that series to a space station. There are also more serious moments, such as a conversation between Rory and the Doctor about how much Amy means to them both, or between Rory and Kevin about finding your place and purpose in the world. These moments serve to ground the characters, making the Doctor, for all that he is an alien, very human. There’s a wide variety of art styles, and while I’m more a fan of some than others, they all seem to work for the stories being presented.

Most of these are written by Tony Lee, with the exceptions being the stories from the 2011 Doctor Who Annual. Spam Filtered (art by Andrew Currie, colors by Charlie Kirchoff) sees the TARDIS overrun with holographic spam mail after Rory and Amy use it’s extra-temporal internet connection to check their email, forcing the TARDIS to set down and reboot. Unfortunately, the planet they land on is scheduled for destruction in about an hour…. The art here is pretty good, especially when it features the Doctor or Amy. Rory kind of gets the shaft, though. Also, the leader of the Scroungers is totally Danny Trejo. In The Ripper’s Curse (art by Richard Piers Rayner, Horacio Domingues, & Tim Hamilton, colors by Phil Elliott) the Doctor and company get sidetracked to Whitechapel, London just in time for Jack the Ripper’s reign of terror. The art on this one is shared among three artists, which leads to some small inconsistencies in the visuals, but the colorist is the same all the way through and helps to smooth things out with a painted (maybe watercolor?) aesthetic. It was different. I liked it, most of the time anyway, though I’m starting to think nobody can draw Rory properly. They Think It’s All Over (art by Mark Buckingham, colors by Charlie Kirchoff) has our protagonists once more sidetracked on their way to their football match, this time a case of right place, wrong time. This time, they’re in the ninth century, stuck between the invading Vikings and Alfred The Great’s defending Britons. Good story, and it includes a scene that should help explain just why the Doctor and Rory are two of my favorite characters ever, in different ways. The art was good, as is expected from Buckingham. When Worlds Collide (art by Matthew Dow Smith, colors by Charlie Kirchoff) gives us a minimalist, geometric aesthetic that actually worked better than I’d expected. The story involves a strange resort built on a rift allowing for different spaces slightly out of phase with each other….until an accident merges them all. Suddenly, there’s a dozen Amys, a dozen Rorys, and a dozen Doctors….and a whole army of Sontarans. Also introducing Kevin the Dinosaur! Space Squid (art by Josh Adams, colors by Rachelle Rosenberg) was weird. I think the writer had a fixation with the television show Castle (and who can blame him?) because the side characters are all named after the cast of that series. Commander Katic, Major Fillion, everyone down to Ensign Quinn. It was honestly a bit distracting, though I did laugh when I first noticed. The likenesses aren’t bad, either…most of the time anyway. The story involves a mind-controlled cult on a space station that wants to enslave the galaxy to their giant squid god. Yeah, you read that right. It’s not Cthulhu though, unfortunately. Body Snatched (art by Matthew Dow Smith, colors by Charlie Kirchoff) sees the Doctor set off to save his friend Trevor, the Horse Lord of Khan. It seems Trevor has had his mind transferred into a bioengineered plant person on the hospital planet of Bedlam….Smith’s art is once more strangely suitable for the story being told. Silent Night (art by Paul Grist, colors by Phil Elliott) is a “silent” tale featuring the dynamic duo of The Doctor and…Santa Claus? Odd, but fun. Not sure how it fits in with last year’s Christmas Special though… Run, Doctor, Run (written by Joshua Hale Fialkov, art by Blair Shedd) is an homage to the Looney Toons, featuring a planet without conventional physics that makes up and down unpredictable. Down To Earth (written by Matthew Dow Smith, art by Mitch Gerads, colors by Gerads & Kyle Latino) was a nice little tale featuring an alien stranded on Earth who would rather just stay if it’s all the same to everyone. The art was good, too. Tuesday (written and art by Dan McDaid, colors by McDaid & Deborah McCumiskey) is told in the form of a letter home to Amy’s parents detailing a few of their adventures. The art was odd, but it worked.

CONTENT: Mild profanity, nothing too severe. Several murders, played to be quite scary in The Ripper’s Curse. A couple scantily clad characters. Minor sexual innuendos in the form of a couple “little blue pill” jokes in Spam Filtered or Rory’s sudden enthusiasm for a beach vacation at the thought of Amy in a bikini. Some prostitution in The Ripper’s Curse, nothing too explicit.

*One that springs immediately to mind is Jack the Ripper, here shown to be an alien stopped by the Doctor and friends, elsewhere stated to have been “stringy, but quite tasty” by Madame Vastra.