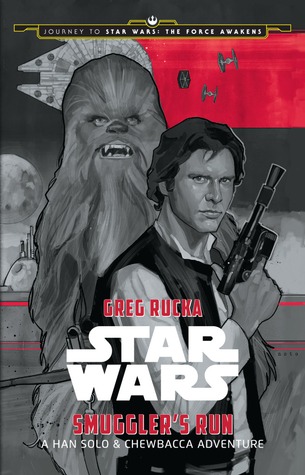 Amid the frenzied run-up to a new Star Wars film being released, fans who know what they’re doing will keep a careful eye on the various books being released for a glimpse at the fantastic world they’ll soon be inhabiting. Some are more relevant than others (Labyrinth Of Evil ended literally as the opening crawl for Revenge Of The Sith started rolling), but there’s usually a number of so-called Easter Eggs thrown in for sharp-eyed fans. The run-up to The Force Awakens is no different. While the body of the book is set immediately following A New Hope, the tale is bracketed by a prologue/epilogue set just before the new film. For that matter, it wouldn’t at all surprise me to have elements from the main tale become relevant later as well, thanks to the newly-inaugurated interconnectivity of the Star Wars canon.

The Death Star is destroyed! Against his better judgement, Han Solo pulled a last-minute about face and joined the battle, distracting Darth Vader long enough to allow Luke to make the fateful shot that saved the Rebellion from certain and immediate destruction. Now he just wants to get off-world and back to Tatooine and use his reward money to convince Jabba to cancel the bounty on his head. But when Leia comes to him with a desperate mission only the Millennium Falcon is fast enough to pull off, Han is surprised to find himself taking the job. In the wake of the destruction of the Death Star, the Empire is hitting every Rebel cell they can find. One such cell is run by Lieutenant Ematt, who also is the man in charge of exploring and setting up fallback points, rendezvous, and supply caches for the Rebellion. Though his team is dead, Ematt himself is still at large….for now. But the Imperial Security Bureau is hot on his trail, and the Falcon is the only ship that has any hope of reaching him in time….

On the one hand, this isn’t a very complicated tale. It’s Han being mercenary, trying desperately to avoid polishing the tarnish off his proverbial heart of gold. We’ve seen that before, quite a bit as it happens. We’ll probably see a lot more in the three years between A New Hope and The Empire Strikes Back, as there’s now a brand new clean slate to draw on. On the other hand, Greg Rucka has an incredibly solid grasp of these characters and what makes them tick. You see the first twinges of conscience from Han as he realizes that every time the question of trust comes up, its not his integrity but Chewie’s that convinces even his oldest friends to trust him. You see Chewie’s willingness to throw in whole-heartedly with the Rebellion, restrained only by his friendship for Han. You see the bond between those two characters. Is the story anything incredible? No, but it’s well-executed and contains enough action and excitement to keep you turning pages long past when you’d planned to set it down. On the whole, I would recommend it.

CONTENT: No profanity. Some violence, not too gruesome for the most part. Mild flirting.