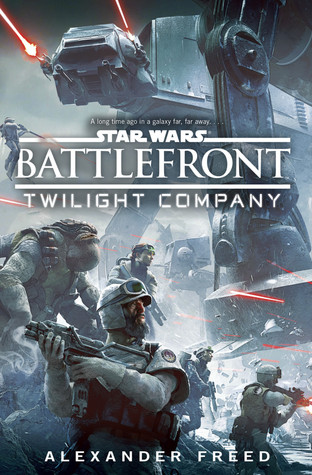 Not going to lie, I am insanely excited for the new Battlefront game. Nevertheless, video game tie-ins are always a touchy proposition. For every Halo: The Fall Of Reach there are a dozen that don’t work nearly as well. This one? This one manages to be not only a great tie-in, not only a great Star Wars novel, but a surprisingly solid military novel in general.

In a galaxy torn by war, few have seen more death and destruction than the troops of Twilight Company. Every time there’s a dirty, dangerous job to do, it seems Twilight draws the short straw. Twilight has its fair share of ideologues, same as any unit in the Rebellion, but that’s not Sergeant Hazram Namir. Namir doesn’t fight because he believes in the Rebellion, he’s not even sure he believes the Rebellion is fundamentally different from the Empire. Namir joined Twilight because fighting was all he’d ever known, and the Rebellion was as good a cause as any. Now he fights for his brothers in arms, his adopted family. Lately, however, Namir can’t shake the feeling that Twilight deserves better than he can give it….

This is not your average Star Wars novel. Instead of mythic heroes waving lightsabers in the face of capital-E Evil, Alexander Freed offers up a tale of ordinary men and women wrestling with that age-old question that eventually occurs to every soldier: just what is worth fighting—and dying—for? The result is a remarkably mature and nuanced entry into a franchise more often known for stark moral divides. The bodycount is high, which on the one hand accurately reflects the game it’s hyping, but on the other hand is odd for a Star Wars novel. Like I said, though, this is far from a typical Star Wars novel. This is a gritty, bloodstained war story that has more in common with Saving Private Ryan than it does the mythic tones of most Star Wars stories. At the same time, though, this is still pure Star Wars. It’s just that here we take the spotlight off of the more mythic characters and focus on the ordinary men, women and aliens living and dying around them in the background. If you’re after a light, cheerful read in which Good triumphs over Evil with only minor setbacks, you should look elsewhere. Bottom line: If you’re more interested in an examination of the cost of war on those who fight and die in the mud, then this is well worth the cost of admission.

CONTENT: Strong violence, occasionally gruesome, and with a massive bodycount that includes a not insignificant number of the named protagonists. Mild profanity. Mild sexual innuendo.

Take three! I think this is my favorite of these shorts so far. Entanglement is the third of four three-minute shorts being released to help promote the upcoming Star Wars: Rebels TV series. I posted on the first and second shorts a while back, and the final one is on its way. Those same four prequels were also adapted by Michael Kogge into a series of short stories in the book Rise Of The Rebels. These prequels are meant to introduce you to the characters from the show in the context of an actual story as opposed to their earlier introductions that focused more on the production/character conception side of things. This time we meet Garazeb “Zeb” Orrelios, the brawny (yet intelligent) Lasat who serves as the muscle for our crew. Check out the short below:

Here we watch Zeb get lost on his way to a rendezvous and get distracted rescuing a local street merchant from Stormtroopers, who of course have to call in reinforcements. It was a lot of fun, especially his running banter with Kanan over the comlink. Zeb is an interesting character, and I look forward to seeing him develop as the series gets rolling. There’s an interesting fighting dynamic here with his “Bo-Rifle” that we didn’t really get a chance to see put through its paces, but that’s a function of the runtime. Plus, he’s voiced by the guy that does Wolverine in all of the animated Marvel stuff–Steve Blum, if you were wondering. And he’s got the whole thing where he’s based on the early Ralph McQuarrie designs for Chewie, which is cool. The short story version of this tried to add a little bit to the choreography of the fighting, adding a bit where Zeb starts an abortive chase down the adjacent alley, but literally goes nowhere because three sentences later he’s back in the hangar. I laud the effort, but decry the lack of follow-through. Maybe this was an artifact from a previous version, or or maybe it just needed one more draft. I don’t know. I wanted it to work, but it didn’t. Based on everyone referring to these shorts as prequels, this is set sometime just before the Star Wars: Rebels series kicks off.

And here we go for take two! Art Attack is the second of four three-minute shorts being released to help promote the upcoming Star Wars: Rebels TV series. I posted on the first short a couple days ago, and the final two will soon follow. Those same four prequels were also adapted by Michael Kogge into a series of short stories in the book Rise Of The Rebels. These prequels are meant to introduce you to the characters from the show in the context of an actual story as opposed to their earlier introductions that focused more on the production/character conception side of things. This time we meet Sabine Wren, a teenage Mandalorian artist-slash-explosives expert. Check out the short below:

Here we watch as Sabine creates a diversion to allow the Ghost to take off unnoticed, and her preferred method of creating diversions seems to involve graffiti and taunting stormtroopers, followed by explosions. I really did enjoy this one, and I think Sabine will probably end up being one of my favorite characters. She’s spunky and sarcastic, both of which are traits I fully enjoy seeing in my characters. Plus, Mandalorian! That said, I’m hoping that the actual show doesn’t veer as far to the kid-side as this one did–without spoilers, there should be a body count to this diversion. Plus, the stormtroopers are portrayed as being even stupider than usual. The short story adaptation here irked me as well with it’s portrayal of the troopers. You don’t have to work so hard to convince me that stormtroopers are bad! We know that. Having the POV trooper reflect on how he was recruited as a result of his school detention record for bullying was blunt. Having him think “Artists were almost as bad as rebels. They could draw, paint, and create things he couldn’t. And for that they deserved to be crushed.”? That’s about as subtle as a brick upside the head. I don’t have a problem with “black and white” characters, per se, but it stands in stark contrast to the more nuanced work of earlier writers, such as Timothy Zahn’s stormtrooper characters in Allegiance and Choices Of One, or Davin Felth, the character from Doug Beason’s short story When The Desert Wind Turns. On the other hand, the story did explore some of Sabine’s motivations as well, and lent an added effect to her paint bomb, so it wasn’t all bad. These shorts are being referred to as prequels to the series, so I’m assuming this is part of a minor mission set before the introductory TV movie coming in April.