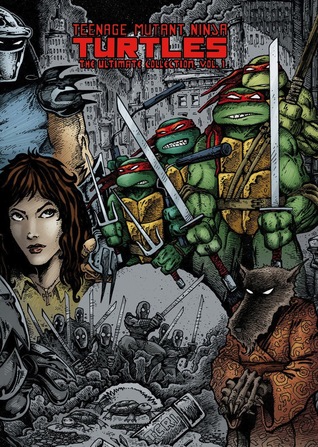 What’s your frame of reference for the Turtles? For me, it’s the general cultural awareness that came about in the early/mid-90s when they were all the rage, largely fueled by that first cartoon series and the subsequent Jim Henson-powered films. Not that I actually saw the show or movies at the time–I was pretty short, and my parents didn’t approve of the crude humor. Not to mention that, according to them, my brother and I “didn’t need any encouragement” to beat the crap out of each other. Nevertheless, the Turtles were pretty inescapable. They were everywhere! There was always something that bothered me though. Half the team (and most of the villains) are carrying bladed weapons, but nobody every seems to get seriously hurt. I mean, why carry a katana if you’re not going to bifurcate something or someone? Obviously it’s aimed at kids, I get that, but….it still bugged me. The original comic series though? The one that everything else sprang from? No such compunctions. My library was awesome enough to recently pick up a nice hardcover of the first arc of TMNT comics, from way back in the mid-80s, and I have to say that this was a lot of fun to read.

Everybody knows the Turtles’ origin story in one form or another. Pet turtles fall into the sewer, get exposed to some sort of mysterious Ooze, mutate into humanoid form and are raised by a similarly-mutated rat who used to be the pet of a ninja master. Stuff like that happens in New York all the time, right? Most of the adaptations have stuck pretty close to the original origin, though I think they’ve all omitted the cameo by young Matt Murdoch that Eastman & Laird manage to sneak in here.* This collection is the original TMNT, way back when Eastman & Laird were still independent and nobody was telling them what to do. Villains are introduced and killed off just as quickly, though to their credit Eastman & Laird got into the “continuous arc” thing pretty quick once they figured out that this crazy joke was actually going to see more than one issue. Still, this is far from the Turtles you’re probably familiar with. For one thing, they kill people. Mostly just Splinter and his Foot ninjas, but there are also a hefty number of alien casualties during the Turtles’ interplanetary adventures. People get sliced and diced, impaled, thrown off of rooftops, shot, you name it. There’s plenty of violence to go around! One issue has Raphael accidentally intruding on a young couple’s “alone time,” crashing through their window, cracking a joke, then escaping the apartment with a bra stuck to his head.** Oh, and despite being teenagers, the Turtles apparently have a taste for alcohol. One requests a beer, and during Eastman & Laird’s homage to the Star Wars cantina scene at least one of the Turtles gets plastered on alien moonshine. For obvious reasons, they toned things down a bit before marketing the franchise to kiddies.

Like I said, this was a lot of fun. You have to go into it with the right mindset though–this is about the furthest thing from a serious comic you can get without ending up with Axe Cop. The series is patently ridiculous from the get-go, when you think about it, and you have to agree to be okay with the idea of humanoid mutated turtles and rats, not to mention a large variety of aliens. Interplanetary teleporters, dinosaur-based aliens, a robot with the brain of a scientist, even a giant hollowed-out asteroid spaceship, there’s seemingly no end to the ridiculousness Eastman & Laird throw at you. I love it! The writing is occasionally a bit wonky, but that’s to be expected from someone new to the game. Keep in mind, these guys were self-publishing back then! The art is surprisingly good under the circumstances, but don’t go trying to identify the Turtles by their mask color–that’s a conceit the show came up with. The comic is black and white, and even once the covers get color their masks are all red. If you can enjoy reading a comic without taking it too seriously, you should really give this a shot….

CONTENT: Some violence, including but not limited to people (and turtles, and aliens, and robots) getting shot, stabbed, cut, impaled, and smashed in various orifices with bladed and/or blunt weapons. Mild profanity. Mild sexual innuendo, played for humor. Some drinking, which I usually don’t make note of, but this is a property that’s usually associated with kids these days.

*Yep, you read that right. The Turtles’ origin is tied to Daredevil’s. See what fun you can have when you self-publish?

**I have no idea where it came from though–the young lady in question was still fully clothed….