Tag Archives: The Blood Of Titans

Review: “The Blood Of Titans” by C. Michael Forsyth 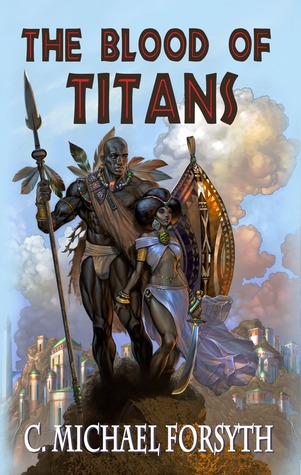 Meh. I’ve commented before that sometimes these Goodreads giveaways sneak up on you–there have been quite a few where I have to scratch my head and wonder why I ever entered the giveaway for that particular title. There’s even been a couple where I’ve been notified that I won, but have no memory of signing up! Clearly I need to be more careful, and have been putting an effort into doing so. At least in this case I do remember clicking that fateful link, though I can’t recall why. This isn’t my usual fare. As such, my opinion of it was perhaps lower than many others would be. It wasn’t that it was bad, per se, and in fact when I would pick it up the pages flew by fairly quickly. The problem was simply that I had no motivation to pick it up. It would lay there by my bed, untouched for a week or longer before I picked it up once more. It wasn’t bad, it just didn’t really engage my interest. I’ll also admit to having a “bad taste in my mouth” (if you’ll pardon the expression) towards the book from the get-go. You see, when I received the book in the mail, it came with the following letter:

I hope you enjoy the novel. If you do, please take the time to post an Amazon Review and paste it on Goodreads as well – but only if you rank it 4 or 5 stars. And let your friends know about it on Facebook and Twitter.
If you don’t like it, well please be courteous and don’t post a review–simply pass it on to a friend!
Best wishes,
Mike

I’m sorry, but that’s not the deal. The whole point of the FirstReads program is to generate honest reviews for the books being publicized. To ask me to refrain from reviewing if I didn’t like the book? That’s just manipulative, and subverts the whole program. Not to mention that you only seem to “win” more giveaways after finishing and reviewing the ones you’ve already got, so….yeah, not going to be following those instructions. Not an option.

Our tale is set in ancient Africa, in a time of glorious kingdoms and stunning betrayals. The coastal kingdom of Kali has long thrived under the rule of it’s king, Babatunde The Good, but now their ancient enemy, the Zimbai people of the plains, stand ready to finally destroy them. Each of the king’s seven sons have fallen in battle, and now he is left with only is daughter Halima. With little choice in the matter, Babatunde has betrothed Halima to Olugbodi, the young king of the Snake People, formidable warriors in their own right, to cement an alliance against the Zimbai. But all is not as it seems….what follows is an adventure full of intrigue, romance, peril and betrayal.

Like I said, the book wasn’t bad. It flowed easily, was remarkably well constructed for what I believe is a self-published work, and (when I got around to picking it up) was a moderately-enjoyable tale. Others would probably rate it higher. It just wasn’t for me. Not being an expert on ancient Africa, I can’t speak to the accuracy of Mr. Forsyth’s research, but I will say that it certainly seemed plausible. By and large the characters were well-rounded, or at least showed hints of being even if the plot didn’t always allow them to display their different facets. Even the villain(s) were more subtle than the simple black hats that so many of us want to write, and for that I give Mr. Forsyth credit.

I did have a couple issues, of course, which I shall discuss below. Minor spoilers may occur, read at your own risk. Longtime readers know that I routinely do this even when I’ve otherwise given nothing but praise to a book, so please understand that there’s no ill will here. Had I gone hunting, I might have come up with more, but these are the ones that are still bugging me.

CONTENT: No profanity that I can recall. Some violence, occasionally a bit gruesome. Some unexpectedly explicit sexual content.