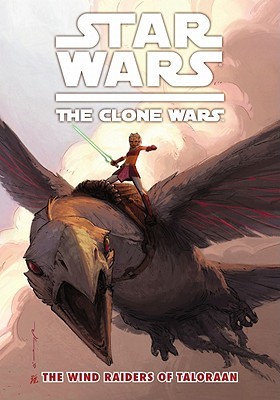 And so continues my foray into the Expanded Universe material related to The Clone Wars! This time, the third digest-size novella The Wind Raiders Of Taloraan….

After accidentally derailing a delicate diplomatic meeting with the Bothans, Ahsoka is assigned to accompany Obi-Wan and Anakin to observe negotiations with the Denfrandi, rulers of the planet Taloraan. The Republic needs Taloraan’s Tibanna gas supplies for the war effort, but with the Defrandi already secretly in league with the Separatists and the primitive Wind Raiders simply hostile to anyone and everyone, this mission may be simply impossible for our heroes!

As with the previous entries, the story here is pretty decent. Its a little formulaic, with Ahsoka messing up and then learning her lesson by the end, but this is primarily aimed at the younger set, so we can’t complain  too much. Plus, John Ostrander is always a pleasure. I’d have liked to see his longtime collaborator Jan Duursema come along for the ride though, and give us a break from the stylized art of the Fillbach Brothers. It’s not bad, I suppose, I’m just not really a fan. Again, if you like the show, you’ll like this. If you’re not familiar, it won’t do as much for you.