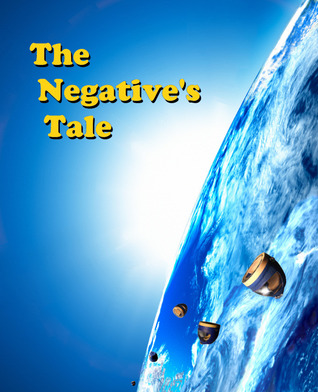 Is it better to be overly ambitious and succeed imperfectly, or to nail a solid performance that lacks in spectacular challenges? Mr. Leib apparently believes in the former. The Negative’s Tale is an incredibly ambitious tapestry of a novel, and I’d be lying if I said it fully hit the mark on all counts, but it was pretty fun to watch it try. I should mention that I was given a copy of this book to read and review by the administrator of a Goodreads group I’m a member of, though I’m not sure what his connection to the book is. If he’s the author, he’s working under a pseudonym, and the publisher seems to be Amazon’s Kindle-based self-publishing service. So I don’t know. It doesn’t really matter, I’m just mildly confused.

The central narrative here concerns the attempted murder of Bertie Lindermann, a nearly-immortal engineer on one of the various space stations hanging in orbit around the earth. Apparently someone drugged him, removed his helmet, and pushed him out an airlock. The only person Bertie’s sister-in-law Vice Admiral Eagon Wu trusts to investigate the crime is her estranged husband Allon Wu, a retired Second Navigator. Woven through this murder mystery are multiple threads of flashbacks, mostly telling Allon’s story up to the point we first meet him but also serving to explore a few other secondary characters as well. Can Allon Wu solve the mystery and reunite with his estranged wife? Only time will tell!

As I said before, this was an incredibly ambitious production. The world these characters inhabit is an incredibly interesting one, a world where people with telepathic abilities are trained and employed as navigators on the craft wending their ways between the stars. Wu’s talent as a Dowser is not particular useful in and of itself, but the fact that he’s a rare Negative has no end of uses, allowing him to co-opt the telepathic abilities of others in close proximity. This particular concept is one I’ve not seen before, at least not in wider usage. The idea of people keeping brain-dead clones to allow them almost unlimited longevity is slightly more common, but still a fascinating one. Where the novel misses a step is in the flashbacks. The non-linear nature of the story could be great if done with slightly more adroitness, but as it is Mr. Leib has to occasionally go through a number of contortions to justify sparking particular flashbacks, with varying degrees of success. For example, one of the early flashbacks was prompted by the sight of a particular pin sticking out of the sand. All well and good, but we don’t find out what’s significant about that pin until the very end of the flashback, by which time we have almost forgotten it as an inconsequential detail. Flashbacks featuring other characters occasionally work–such as a character giving testimony of prior events, for example–but at other times are jarring as we leave Wu’s POV for an uncharacteristic side trip. The flashbacks also have the unfortunate effect of leaving us to infer certain information that we won’t learn from the flashbacks until significantly later in the story than when it is relevant. At the same time, the author occasionally lapses into “info-dumping,” which I don’t always mind but some would consider a cardinal sin of sci-fi writing. The mystery itself was decently executed, though I figured out most of what was going on a bit before I think I was supposed to. All told, not bad, just not quite as good as it perhaps could have been.

CONTENT: Some violence. Little profanity, none that I recall at any rate. No real sexual content, aside from an alien mating ritual that is ridiculously non-erotic. One character belongs to a murderous cult, but there’s nothing eldritch there. Just a murderous psycho.