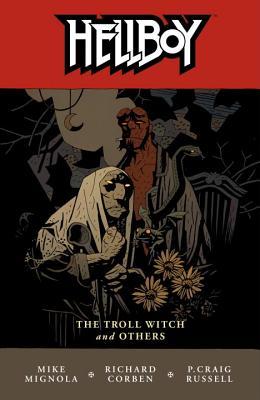 That figures. I stated in my last Hellboy review that I couldn’t wait for the next volume to figure out where the story was going, and so of course the next collection was an anthology. Oh well, I like those best anyways….While he still handles most of the art, this time out, Mignola collaborates with a couple guest artists for special occasion stories.

We open in Malaysia, 1958 as Hellboy investigates a local creature known as The Penanggalan, a demon born when an old priestess accidentally kicked her own head off. (“That might be the stupidest thing I’ve ever heard.” “I did not say it was true, only that I believe it.”) A short, predictable, and delightfully strange tale. We then move on to Alaska, 1961 as Hellboy investigates claims of a monster haunting the grave of Hercules in The Hydra And The Lion. Mignola is the first to admit that this one doesn’t make a lot of sense, but in Hellboy’s world that really doesn’t matter too much. The Troll Witch takes us to Norway, 1963 as Hellboy investigates a series of horrific murders. This has the distinction of being one of the only stories where Hellboy doesn’t get to punch something, which leads to a bit of a subversion of your expectations. The Vampire Of Prague is set in 1982 and is Mignola’s first time writing for P. Craig Russell. This is some good stuff. I especially enjoyed the part where the vampire is chasing his own severed head down the street…. Dr. Carp’s Experiment takes us to New York, 1991 as Hellboy and the BPRD investigate a newly-discovered secret chamber in a notorious haunted house. This one was good, I always love a good time travel story. The Ghoul is set in London, 1992, and is one of the strangest Hellboy tales I’ve seen. It features our favorite demonic hero beating the crap out of a ghoul who speaks solely in creepy poetry, and a puppet theatre production of Hamlet. Makoma is another weird one, this time a collaboration with Richard Corben. Mignola draws the framing story set in 1993, while Corben draws the legend being narrated. I’m not entirely sure how to understand this one, but it seems to be about Hellboy in a past life. Sort of a “Wheel of Time” thing where everything repeats throughout time. If so, it sheds some light on Hellboy’s eventual battle with the Ogdru Jahad….

Content: Minor language, some stylized violence and gore. Mild sexual content, and some non-sexual nudity. A fair amount of occult content, however. In Hellboy’s world, everything supernatural would seem to exist in….well, not harmony, but a unified worldview. This includes the Christian God and the Devil as well as more Lovecraftian things such as the Ogdru Jahad. God and the Church have power, but there are other things abroad in the world that have power as well and were old long before Christ was born in his manger. Hellboy is brought to Earth from another plane–implied to be Hell–in a dark ritual performed by Grigori Rasputin. He later tries to use Hellboy as the focus of another ritual to free the Ogdru Jahad (similar to H.P. Lovecraft’s Great Old Ones) and bring an end to the world as we know it. One of the short tales implies that Hellboy himself is the son of the Devil and a mortal witch. Ghosts, vampires….the Beast of the Apocalypse…..