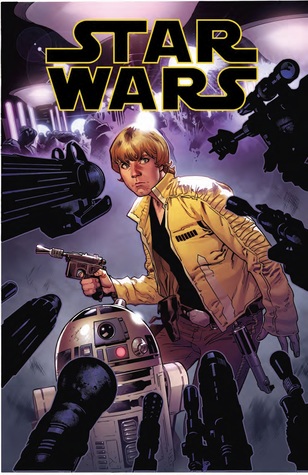 I very much enjoyed the first volume of Marvel’s ongoing Star Wars series, but many other reviewers took issue with it for playing things safe and giving us a story like many we’d seen before. These criticisms are not completely unfounded, I’ll admit, but neither are they completely fair. Either way, this is not a problem the series has going forward…. This second volume also includes the one-off flashback story The Last Of His Breed, featuring Obi-Wan Kenobi adjusting to his exile on Tatooine.

Luke Skywalker has successfully escaped the clutches of the bounty hunter Boba Fett, but all he got for his troubles was the journal of Obi-Wan Kenobi–no small prize, but probably not all that helpful in furthering his Jedi training. So what’s the next logical step in learning about the Jedi? Try and sneak onto Coruscant to infiltrate the old Jedi Temple, of course! But when his attempt to find a discreet ship and pilot in a seedy bar on Nar Shaddaa goes horribly awry, Luke finds himself the prisoner of Grakkus the Hutt. In addition to the traditional crime and vice, Grakkus has made a name for himself as one of the foremost collectors of Jedi artifacts. Now Luke faces the battle of his life in Grakkus’ arena, billed as “the last Jedi” and pitted against a fearsome creature for the amusement of Grakkus’ fellow crime lords….Meanwhile, Han and Leia are out scouting potential locations for a new Rebel base when they run across a figure from Han’s past. Her name is Sana, and she claims to be his wife….

As with the previous volume, this was some stellar work. Jason Aaron nails the banter between Han & Leia, to the point where you can almost hear Carrie Fisher and Harrison Ford delivering the lines, and Luke’s mix of cockiness and self-doubt is spot-on for his character and situation. Also of note is Stuart Immonen’s spectacular artwork. From the character closeups to the panoramic vistas, this was pure Star Wars. Also amusing was watching our entire cast wade into battle wielding lightsabers. Did Luke manage to salvage anything of value from Grakkus’ stash on his way out? I guess we’ll have to wait and see….

CONTENT: Moderate violence, not too gruesome most of the time. Mild profanity. Mild sexual innuendo and flirting.